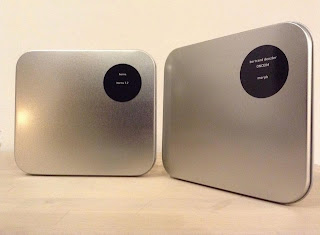 "morph", the piece played by ONCEIM, is one large, wooly mass. It doesn't float, it sits there and seethes. The sensation one gets is of a single, unvarying entity but, like most such creatures, it's comprised of multiple strands. Long held notes, generally low in pitch and fairly loud are the rule, instruments entering and exiting the pulsating sound-organism, perhaps just slightly varying their tone. A spine of low percussion (soft mallets) and throbbing feedback underlie the skein of strings and horns atop. Work like Feldman's "For Samuel Beckett" are a likely reference point, but Denzler's piece is darker, even cynical, honing in on some unseen node, gouging out the space like some huge, sonic drill. It proceeds unabated until it's finished, vanishing suddenly, leaving an empty hole. Impressive work.

"horns 1.2" is performed by Pierre-Antoine Badaroux (alto saxophone), Denzler (tenor saxophone), Fidel Fourneyron (trombone) and Louis Laurain (trumpet). Not knowing otherwise, I might guess that the music here is essentially these instruments' parts from "morph", isolated. As in the large ensemble piece, long, rich lines are held with relatively minor fluctuations in pitch. Perhaps due to the nature of the elements in this particular configuration, one is reminded a tiny bit of Baroque and Renaissance horn music, but the general world conjured forth is kind of streamlined version of "morph", less wooly and billowy and every bit as attractive. I missed seeing this group last week but, coincidentally discussing it last evening with Jacques Oger, was informed that, for that affair, the four musicians were given a small interval from which to choose their notes, confining them to a handful, which they played more or less as in this recording. So that approach was perhaps in effect here and, for all I know, might be the basis for "morph" as well. Whatever the case, the result is extremely enjoyable music to get lost in, to contemplate both the individual strands and the overall effect, simultaneously or flickering back and forth. Beautifully played, simply conceived and, as with "morph", a welcome addition to Denzler's discography. I might quibble, given that the combined duration of these discs is a bit over an hour, that they should have both been on a single disc, but...still well worth it. 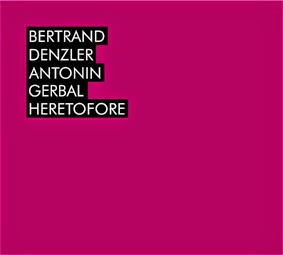 "Heretofore" finds Denzler in duo with Parisian drummer Gerbal, a 34-minute live set from May, 2014, and in a very different space. It's an oddly lackluster performance, freely improvised and tending toward the spare but ungainly and awkwardly shifting ground, enough that one has the sense of the pair never finding sure footing. Some of it, I think, is due to Gerbal's reluctance to really dig in, preferring to adopt a more scattered, pointillist approach that, to these ears, doesn't quite gel with Denzler. I take it this was intentional (Gerbal is an excellent drummer) and maybe the hesitancy was a sought for point, but I found it overly dry. Denzler, via breath tones and low, guttural cries, seems to be seeking to insert his sound into the minute gaps of the percussion and sometimes, if one listens to it that way, it can begin to work. But overall, I'm left with simply the impression of a desultory show, something that certainly happens often enough everywhere, not a problem, but leaves me wondering why it was committed to disc. Maybe a step in a process I'm not comprehending.