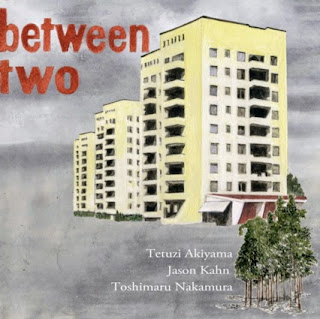 As Kahn writes in his brief notes to this disc, he's played with Akiyama and Nakamura in various combinations since 1997, though this is only their second release as a trio. More significantly, Kahn chose to "confine" himself to drum kit here and Akiyama is playing un-enhanced acoustic guitar, making for a far more delicate, gentler sound world than one might have expected. It begins with some aggression--Nakamura generating a rough rumble on his nimb, Kahn answering with some rattling drum work but very soon, Akiyama's guitar, serene and soft but bearing a healthy amount of quiet agitation, enters and tempers matters a great deal, setting the stage for much of what follows. There's a kind of sizzle running through much of the performance, via both kahn's cymbals and Nakamura's electronics, the latter varying more than one might expect, constantly shifting through dozens of sound-worlds, sparse to clogged, metallic to feathery; several times I broke out into a smile at his contributions,, at their raucous boldness. In some ways, it's closer to an efi kind of situation, but a particularly good one, perhaps bringing back lessons learned from more reductionist, eai forms. throughout, Akiyama's playing is the leavening factor. He's been known, of course, to play everything from the most delicate free improv to the skronkiest possible boogie. Here, it's lyrical delicacy in abundance, sweetening whatever is tossed his way by his companions, only venturing into some relatively harsh--though soft--bowing in the last few minutes of the final cut. Very impressive how rarely things go astray or begin to lose focus; it happens once or twice, but it's only a few moments before the trio lifts back on track, proceeds down the next corridor. A really enjoyable effort and enjoyable in ways I wasn't expecting coming in. These fellows have put out a large number of releases, true, but listeners should remember this one and check it out. 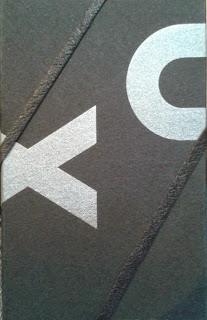 Good old greasy, juicy, dark noise abounds on this cassette (heard here via download). Rice (of VA AA LR renown) sets several murky, quasi-rhythmic forces in motion, all slow, like a horde of awakening giant beetles, clicking, thrumming and grinding. A fine, slightly scary mix of sounds as it oozes along Side A for a good while, seeping into corners. Halfway through, it shifts to a lighter pulse littered with staticky pops that runs to the side's conclusion; remote, subtly disturbing and impressive. Side B begins quietly, gradually working its way up to a churning throb, sizzling on the edges with a lugubrious, dead-slow melodic line buried within. With five minutes to do, this disappears down a drain, replaced by a relatively jaunty sequence of static bursts which in turn segment into various hums and scattered mini-explosions, still keeping a (diverse) rhythmic feel, the sounds becoming progressively more active and threatening until all energy is lost and matters simply peter out. 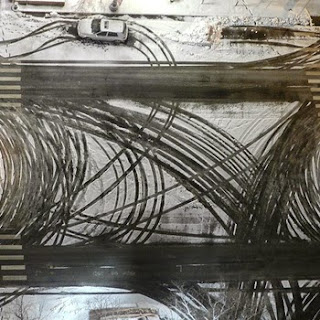 A large and quite varied selection of tracks by Pickles, culled from the past 15 years. Generally electronic in nature with plenty of field recordings and a lurking background vestige of avant-rock, the pieces are, perhaps necessarily, of variable consistency but the choicer ones are very tasty. Surprises abound as when a bass clarinet surfaces in "humid" or the titular keyboard in "upright", much less Mr. Pickles senior. The compilation is so wide-ranging as to be a bit unwieldy as a unit but many of the individual tracks are quite rewarding when dipped into on their own. "rough one", for instance, with its soft, high reeds (?) over indistinct hisses and slowly rotating growls, erupting into a organ-y bellows is very strong. Some nice pickings here and you can sample for yourself via the bandcamp site below.