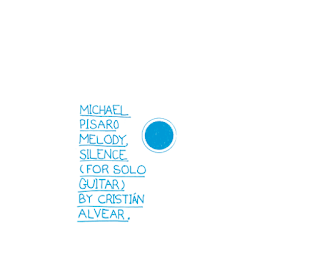 A stunning recording though what to say, how to describe beyond the piece's basic structure...difficult. Pisaro writes, "There are up to 12 fragments (or pieces) which can be played in any order and which allow for various transformations, cuts, extensions and silences. Each guitarist makes their own version." So clearly, the credit for the work's success is pretty evenly distributed and, of course, I'd love to hear other versions. But from what I've heard previously from Alvear, my guess is that his realization (on acoustic guitar, by the way) will be one of the strongest.

The twelve sections seem to fall into one of three types: quiet, melodic, "traditional" playing, drones and silences. As I chart it, the sequence here is M-D-D-M-S-M-S-D-S-M-D-M, with each section lasting between three and five minutes. The melodic sequences vary slightly from each other though all are quiet. They also have a certain rhythm, though very slow. The "melodies" range from slightly sour near the beginning to a very tonal, almost processional feel in the final episode--each one is crystalline and beautiful on its own, clearly and profoundly played by Alvear. The drones, achieved I assume via ebow or similar device, are also fascinating, varying both inherently (though super-subtly) and in one's listening environment when shifting one's head. The three silences last about three, two and four minutes and, as ever in fine realizations of Pisaro's music, are superbly placed, pools of contemplation.

Everything is laid bare, even stripped, the disrobing revealing a pure, taut and sensual skeleton. Like some object, maybe an old pine cone, simple and complex, examined from three angles, each opening a different history of the cone though each, of necessity, connected to and part of the other. Very hard to describe except to say we're fortunate to have yet another fantastic example of Pisaro's conception, exceptionally realized by Alvear. An absolute must for anyone interested in this area of music, truly beautiful. 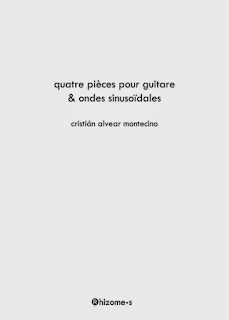 Alvear (on this release using his full name) makes it two for two with this entirely absorbing and excellent modern repertoire recording of four works.

I don't think I'd ever heard Alvin Lucier's "on the carpet of leaves illuminated by the moon, for guitar and pure wave oscillator" (2000) but it's a gem in line with many of his other works for acoustic instrument(s) and oscillators. Here, the guitarist plays single, purely ringing notes which interact with the sine wave, forming the familiar wavering ghost tones. A video I found of the piece performed by Jacob Sudol shows the guitarist adjusting his tuning as he plays; I think Alvear does the same, although it's very subtle if so. Even though the general aspect of the piece conforms to many others by Lucier, it's nonetheless entrancing, clearly played and luminous.

Ryoko Akama's "line.ar.me, for guitar and sine waves" (2014) lies in adjacent territory, and is almost exactly the same duration as the Lucier, but carries its own distinct aura. Unlike Lucier, Alvear is not asked to parallel the sine waves. Instead, there' more of a "normal" duet sensibility, the guitar sounding low, dulcet tones, spare commentary, the sines flowing through, intercepting the notes, bathing them, continuing on. Very contemplative and serene, with the slightest melancholy tinge--lovely.

The title, "premières et dernières pensées (avant de s'endormir)", a 2014 composition by Bruno Duplant, reminded me a bit of Satie's "Avant-dernières Pensées"; wonder if that was in mind? The guitar here is closer, just a bit, to melody. The notes don't cascade by any means, they're still hanging in air, but now sometimes in small clusters and one can imagine, if heard speeded up, that they might form a recognizable melodic pattern. A hum lies beneath, possibly ebow generated, a kind of pedal point. I'm guessing, from seeing other scores by Duplant, that the note choice is largely up to Montecino but whoever's responsible, those choices are great, a little romantic, a little sad, very clearheaded. Silences punctuate the work, giving space for consideration. I might have liked to have heard this piece cut back by a third or so, from its 16 minutes to the 12 of the previous two, but that's a minor quibble.

The big revelation for this listener is the final work, "pieza de escucha III" (2013) by Santiago Astaburuaga,a Chilean composer whom I'd not previously heard. Though the piece has a similarly restrained volume level and slow pacing akin to the above works, there's no thoroughgoing electronics (they're quite present, but appear episodically, in various guises) and also a much wider sonic palette from the guitar, including rustling and percussive effects, the latter particularly wonderful and resonant appearing about halfway through. But far more than the individual elements, there's something special about the choices and sequencing that sets this one apart, some "way of hearing" that resonates very strongly with me. Even better, you can watch a video of Montecino performing the piece here

A great release, along with the Potlatch above, both required listening.