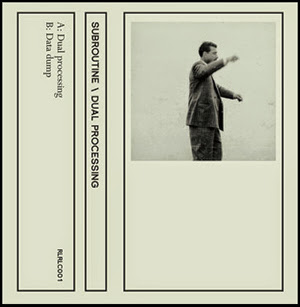 In which inveterate low road-taker Robin Hayward (microtonal tuba) teams up with Morten J. Olsen (rotating bass drum) to further plumb the depths on this cassette release. In fact, though, there's quite a range of pitches in play on these tracks, even if the drift is toward the bottom. Olsen incorporates what seems to be bowed metal, in high, keening tones, for example, every so often. "Data Dump", Side B, is a set of longish sequences, each more or less consisting of a given attack, pitch, etc. sustained (with fluctuations) for a period of time, then moving on to the next, very steady and progressive, paying great attention to timbre and the interaction of the stretched sound. The tuba ranges from smooth to granular, the drum from subsonic quavers to sandpapery scratching, but always in broad, coherent strokes. Late in the piece, there's a drop to near-silence, unexpected and space-expanding, really nice. The title piece on Side A (my initial download was in reverse order and I grew comfortable listening in this sequence! :-) )is roughly similar, though a bit more smoothly flowing in terms of textural choices, tending more toward the groan underlaid with a more percolating rumble. The music begins to fragment earlier this time, about halfway through and again the effect is subtly moving and impressive, the brief pauses implying volume and meaning. When the flow commences it's more burbling, containing numerous small surges and retreats. Thoughtful, concentrated work, creating solid worlds with (not really) minimal means. 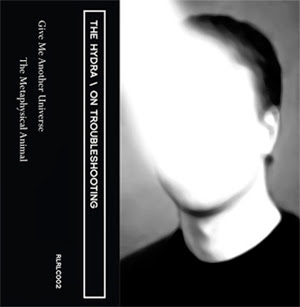 Said mythical creature being one Dimitris Papadatos, a co-owner of the label. Side One, "Give Me Another Universe", is something of a collage construction, seemingly comprised of extracted elements from other music; a piano intro that sounds lifted from some pop song I almost recognize, choral fragments, electronic buzzes, cymbal crashes....the list goes on. It's a kind of trippy melange, hard not to hear the choir samples as 70s horror flick references amidst the electronic throb. About halfway through, matters calm down a bit, the music splaying out into a general wash, still riding on a throb, but the disparate elements mixed into a more homogenous soup. For me, a bit too amorphous and ambient-sounding, too much of a lost focus and easy relaxation (albeit accompanied by lost spirit moans that occasionally reminded me of Lauren Connors and Haunted House). Side B, "The Metaphysical Animal" fares much better in maintaining concentration and forward drive, staying roughly within a single, expansive area, a mysterious, silvery pool of sound. One still gets echoes of elements form the previous track but the vocal traces are more disembodied, have merged with the general structure, having no greater prominence than the pulses, clicks and slippery surfaces that pass by throughout, like a joyride through an alien amusement park, leading to a rocket liftoff. It's a dizzying experience and a great deal of fun.