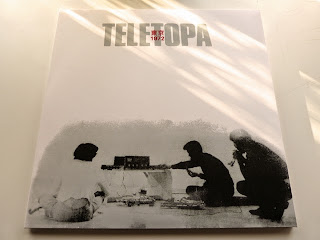 In the first few years after their inception, members of AMM would occasionally ponder, "Why aren't other musicians doing what we are?" A reasonable, if slightly naive question. For all of the lumping together they've suffered with Musica Elettronica Viva or the Spontaneous Music Ensemble, those bands, for all their virtues, arose out of a crucially different set of formations than did AMM and, to anyone giving a more than cursory listen, sounded vastly different. Group Ongaku, which preceded the founding of AMM and was unknown to AMM's members (perhaps with the exception of Cardew), was closer in spirit to AMM's goals. But it was a long while before the ideas explicitly developed by AMM caught much of a footing in the improvised music world.

Except for Teletopa. I think I probably shared in common with most fans of this area of music (at least outside of Australia) an utter and complete lack of knowledge about this ensemble, organized around 1970 by David Ahern (who had been a student of Cardew's and had participated in some Scratch Orchestra events), Peter Evans and Roger Frampton (joined in 1972 by Geoffrey Collins), modeled after AMM to some degree. As Geoffrey Barnard puts it in his detailed liner notes, "AMM was the clear prototype for Teletopa, not only in regard to the type of improvisation Teletopa promulgated, but to the general ethos of the group as well." Interestingly, its brief existence (they disbanded shortly after this 1972 session) coincided with the period of AMM's first fracturing; by the time of this recording, Prevost and Gare were reinvestigating free jazz while Rowe and Cardew were expounding on Mao and Albania. 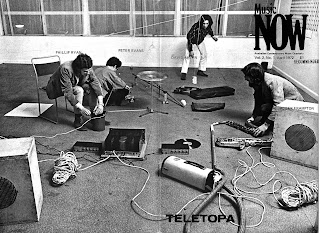 Right from the beginning of the recording, one affinity is apparent: the concern with space and extended periods of minimal activity. That said, the music would never be mistaken for AMM (not that it would aspire to be, of course). The musicians are all credited with electronics (unspecified) and percussion in addition to flute (Collins), violin (Ahern) and saxophone (Frampton); the above photo may give some idea as to their layout and devices. We at first hear a large space, empty save for dull gongs and high-register saxophone shrieks piercing the darkness. The sound world established maintains this character throughout much of the two-disc set, with little if any drone or continuo element underlying matters. As such, I found myself reminded more of the Tudor of 'Variations II' than AMM or any such ensemble, the salient difference being Tudor's ability to balance on the knife's edge of virtuosity and necessity, something that strikes this listener as supremely difficult and a level which Teletopa only occasionally reaches, not really a criticism, more a matter of a goal set very high, however implicitly. Here, there's a clear search going on, a very good thing, but it takes a while before the music really gels. A squall develops, the playing grows frenetic, particularly the saxophone (at least I think it's a saxophone; it's pitched so high and has a chalky enough sound that it's a bit hard to tell sometimes), though to their credit, there's really never a sense of any free jazz inflection. Every so often, much as in early AMM, you detect a faint tinge of mid-60s Sun Ra, but it's rare. About 20 minutes into the first disc, an enjoyable synthesis is achieved, a tight constellation of plucked, tapped and harshly rubbed sounds that suddenly emerges as a palpable presence, very strong, lasting several minutes then dissipating and morphing into the searching mode again, encountering a serious quasi-avian storm along the way, again rather Tudoresque à la Rainforest. Some deeper, more sustained tones appear toward the end of the first disc, from both electronics (sounds like an electric piano of some sort) and low percussion, presaging their greater presence later on. Before that, on Disc Two, we get some fairly disconnected...well, "noodling" would be too harsh a term but again I'm reminded of the disparity between Tudor's work with electronics, which this section superficially resembles, and attempts that fall short of his incisiveness. It's not that it's "bad", just that there's an unusually big drop off between first and second tier in this area, to my ears. My favorite moments of the entire session occur some 20 minutes into the second disc, lasting about ten minutes, and have their germination point in a series, once more, of high, shrill squeaks underlaid by low metal but this time it leads to a marvelously rich and deep interaction, the music attaining a plasticity that it had previously only touched upon. Here, there's something AMMish going on, a resonance that abstracts the music out into the world, very beautiful.

For myself, there's ultimately a bit more historical value (quite a bit) in this release than musical revelation but there's certainly enough strong work to recommend it on that account alone. For those seeking a fuller picture of post-AMM improv from this period, it's a very valuable document.

So you never read this then: