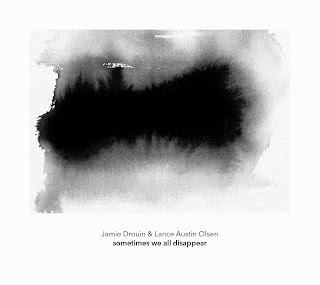 Jamie Drouin/Lance Austin Olsen - sometimes we all disappear (Another Timbre)

From the interview with Olsen on the Another Timbre site, we learn that this release is a kind of memory drawer, crafted from bits and pieces the pair had recorded over the years, such meetings now a difficult arrangement after Drouin (credited here with suitcase modular and portable radio) moved to Berlin from Vancouver. One can imagine the musicians "shuffling through" these recordings, saying, "Ah yes, remember that?" much the way any of us would comb old family photographs. Olsen (amplified objects and audio cassettes) relates, "At each fresh listen the album brings back moments of deeply hidden memories, including times spent sitting in cafes and on buses allowing fragments of conversations to drift in and out of my consciousness" and one does derive a very personal, quiet and introspective feeling from the recording, something that raises the question of whether an artwork can be too personal, something I found myself thinking while listening.

There's a great deal of silence on the disc. Again, I almost get the impression of someone considering an item from a few years back, putting it aside, thinking about it quietly, then moving to the next. This makes for more a series of discrete episodes that can only be "connected", in the listener's mind, by stepping back or perhaps in retrospect. On some listens I found this easier to do than on others, maybe depending on my degree of concentration. Certain portions posses their own independent power, for example the final one, with everyday static abutting some deep and disturbing rumbles, really nice and also providing a slight release from the general spareness of the album. Some linger a little while, others seem more transitory, flitting by before you have a good chance to contemplate them, like the person next to you turning over the page in a photo album before you've had a chance to really examine an intriguing shot.

It's a good recording, posing several interesting questions and maybe even answering one or two.