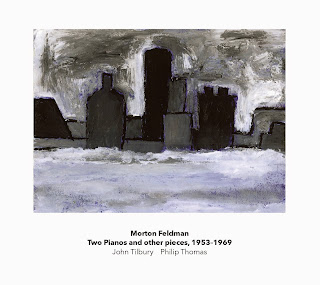 It's a little strange and uncomfortable to be writing about a new release of Feldman's music (and it's a spectacular one) shortly after having read accounts of recent public revelations by Bunita Marcus, dedicatee of one of his major later works, as to the physical and emotional abuse she suffered under him for some twelve years up to his death in 1987. Some discrepancies between artist and work are enjoyable, such as the seeming dichotomy between Feldman's garrulousness, mode of speech etc. and the incredible delicacy and grace of his music. But some aren't. Of course, it's no great news that awful people can produce great art so we simply have to file Feldman into that unfortunate category and move on, though I can understand people having difficulty doing so. I've always been interested in retrospective evaluation of creative work in light of new information but that generally involves one's apprehension of attributes not previously known, not personal failings on the part of the work's creator. For myself, knowing about some horribleness in the individual's life does cast something of a tinge on any subsequent experience, but not a debilitating one. I still have a sense of the work's standing apart though, again, I'm by no means entirely confident of this stance.

That said, this is one extraordinary release. Two CDs, really well structured: thirteen pieces, nine of them for some combination of between two and four pianos, four embedded amongst these for small ensembles of between four and eight players. The principal pianists are John Tilbury and Philip Thomas, with Mark Knoop and Catherine Laws on several compositions while the other musicians include Anton Lukoszevieze and Seth Woods (cello), Mira Benjamin and Linda Jankowska (violin), Rodrigo Constanzo and Taneli Clarke(chimes), Naomi Atherton (horn) and Barrie Webb (trombone). Excellent notes on the music by Thomas can be found at the Another Timbre page for the release and Thomas' own blog.

The set is bracketed by two readings of "Two Pianos" (1957). It's hard to know what to say except to express the contention that were I forced to listen to nothing but these performances for the next year or so, I can imagine worse fates. I don't happen to own any other recordings of this work (though many exist) but I listened to one online by Kristine Scholz/Mats Persson which, while entirely lovely (hell, it's a great composition) lacks the subtle sharpness of the Tilbury/Thomas, the moving lag between the two, the sheer space created. Absolutely spellbinding, the marriage of conception on Feldman's part and crystalline, hyper-sympathetic interpretation by the two pianists. And really, I could say the same about almost every track here but that would be pointless. A sublime balance of the poised and the incisive, restraint plus the willingness to (gently) attack. It's futile to pick favorites but "Piece for Four Pianos" is also profoundly moving and deep and I think I even slightly prefer it to the 1958 recording with Feldman and Tudor. I can't even begin to choose among the ensemble pieces; each one is marvelous, shimmering, thoughtful--choose your adjective.

Everything about the release, conception to execution, is just perfect; one of the finest things I've heard in a long time and an absolute must for any lover of Feldman, warts and all. Apart from the classic Tilbury recording, "All Piano", this might be my favorite Feldman release ever.

I don't wish to detract a bit from the stunning realization of these Feldman pieces;this is a fantastic release.

However, the inevitable inclusion of Ms. Marcus' allegations of Feldman's abuse will no doubt appear in more reviews, and I think it best to practice care in how that plays out. One sentence, Brian, bothers me - "... Of course, it's no great news that awful people can produce great art so we simply have to file Feldman into that unfortunate category and move on..."

With respect, your sentence reaches a conclusion, begs a question, and prescribes filing Feldman under abuser and 'moving on.'
I was a FB friend of Ms. Marcus, and saw her charges against Feldman unfold over time. She subsequently deleted her account, leaving those charges hanging in the public cyber-sphere. That is hardly sufficient for any of us to reach the conclusion we know anything but that Ms. Marcus alleged abuse.

Anticipating (as PTSD is subject to a lot of public discussion without adequate clinical grounding) that some might leap to a conclusion about my remarks, I would offer that I am a retired mental health clinician with over 20 years field experience working with clients with PTSD, the result of rape, domestic abuse, war and other trauma - I am not weighing in as a moonstruck Feldman fan.
Anyone aware of Ms. Marcus' prior public disclosures of incest and rape, dating back years, must understand she has chosen to make her narrative a gradual, very public one. This is not the optimal way to heal wounds, and naturally elicits comments and conclusions from well-intentioned on-lookers.

I think this matters - I've seen the world's multifaceted, nuanced issues sorted out in social media before and it's seldom multifaceted or nuanced.

Points taken, Jesse. I debated mentioning it at all, but it *was* on my mind (and had been made public, or more public than previously) and was circulating around my head while listening, so...