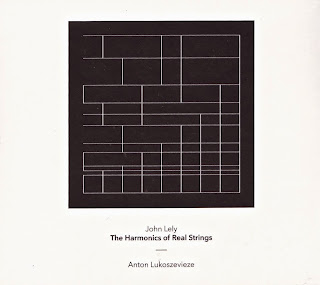 John Lely - The Harmonics of Real Strings (Another Timbre)

This is a tough one for me. In his interview with Lely, label owner Simon Reynall comments that his "music often has the sense of being 'experimental' in a literal, almost scientific sense." I was unfamiliar with Lely's work prior to this release but from the evidence here, as well as from that of several live performances of other pieces I've since watched/listened to online, that seems to be a fair assessment. As I've written before, this approach, to my ears, can reap great benefits but always carries the "risk" of not transcending the "science experiment" envelope. A risk, to be sure, only if you're for some reason hoping for or expecting that transcendence, another matter entirely. I often think of Alvin Lucier and Tom Johnson in this regard, composers (or, using Johnson's preferred term for himself, "list maker") who often use systems of one sort or another, sit back, so to speak, and observe the results. Sometimes the outcome is extraordinary ("I Am Sitting in a Room" being the obvious example), sometimes rather dull. Frustratingly often, the listener is left somewhere in the middle, hearing glimpses of extra-physical beauty or depth only to be drawn back to the mundane, if you will, nature of the process. That's doubtless the point on occasion and maybe it's just that stubborn, clinging old-fashionedness that insists on something more, I don't know.

Listening to six members of the Dedalus Ensemble play Lely's "Symphony No. 3", I get something of the same feeling: unison, microtonal chords in a (almost always) regular procession, related to the Parsons Code for Melodic Contour which consists simply of three symbols--u-up, d-down, r-repeat). There may be more structure embedded there than I can discern, perhaps even some play with phrase construction, but it's a difficult work for me in which to really immerse myself. On the other hand, his "Arrangement", for two pianists, is rather lovely, partially because its very simple melodic line (again regular, with single notes all played on white keys) doesn't technically require four hands at all. But the interplay and dance of the hands as they slowly weave between each other, is somehow extremely moving to watch (certainly a work that gains enormously from experiencing live). And "Distance Learning" is just exhilarating fun. Check out the videos for yourself.

But back to the release at hand. Lely, in the above-cited interview says, "Essentially it’s a very slow glissando along the full length of one bowed string. The player uses light finger pressure on the string – what is traditionally referred to as ‘harmonic’ pressure." He goes on to relate it to experiences he underwent while having difficulty sleeping, scanning the short wave radio spectrum as slowly as possible. Hearing this, I'm immediately intrigued about the transference of that experience to cello (performed here by the always excellent Anton Lukoszevieze). Four tracks, titled IV through I, decreasing in duration, 16:42, 15:57, 12:08, 11:08; I list the times only to see whether or not there might be a hidden pattern--I can't detect one. There tend to be two areas of sound: one, the specific note being glissandoed (!) and two, a background rustle, the latter more discernible the higher up the string Lukoszevieze has progressed (each iteration goes from lower to higher). There are often overtones or secondary notes, leading me to wonder if in fact it's only one string at a time being bowed; I don't know cello mechanics nearly well enough to say. These details aside, I'm left with my overall impression and somehow, I find it not as fascinating or absorptive as I expect. There's a thinness where I want to hear richness; perhaps that's intentional, perhaps an artifact of the recording process, I don't know. I can't help but recall sitting several feet in front of Charles Curtis last year, becoming utterly and ecstatically lost in the depths of his "simple" bowing on Eliane Radigue's "Naldjorlak", wanting that to occur here. Or maybe I need more time with it--I've listened seven or eight times so far, upping the volume a good bit the last couple of occasions, trying to relate the music to the fine cover image by Lely, and the piece is beginning to eat at my reservations. I'm not sure I'll ever arrive at a full appreciation, but I imagine I'll continue to make the attempt over time.