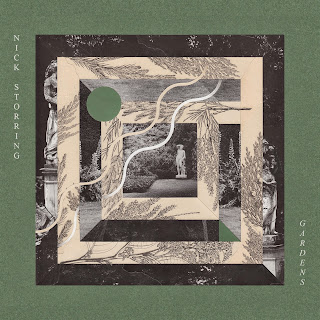 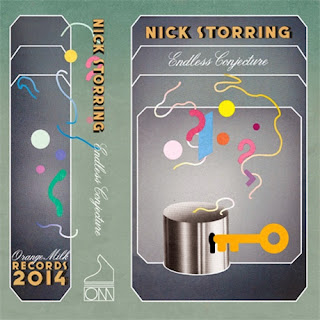 Two solo recordings by Storring though "solo" is stretching the term a bit as he employs dozens of instruments on each ranging from strings to percussion to winds to keyboards to electronics. One of the amazing things is that nothing sounds overproduced or cloying. Plus, there's the charming, often beautiful music.

"Gardens" is dedicated to producer/songwriter Charles Stepney who worked with Eddie Harris and Minnie Riperton among others but whose name and work, unfortunately, don't ring a bell with me, so I'm unable to discern any direct (or indirect) influence on Storring's music except that it's easy enough to hear, whether via Stepney or not, a certain amount of pop song tinge to some of the pieces, most noticeably in the final one. The first track, "Open Your Eyes and Forget", runs some 15 minutes and contains a really nice, very plaintive melody mainly expressed on strings and glockenspiel that enters six minutes in, kind of a sigh with perhaps something of a Chinese cast, and weaves through the remainder of the composition, with variations and re-orchestrations. If anything, it reminds me a little of Jim O'Rourke's work from the early oughts, with a similar sense of simple, unashamed beauty--but this is better. A lovely piece I daresay different from anything you've heard recently. Three shorter songs follow: a jaunty number with banjo (? I think) and jew's harp featured, that morph's into an odd, Henry Cow-ish near-march; a dreamy, flute-driven number, the slow, wafting melody bathed in electric piano and other effluvia; a dance for thumb pianos and other plucked rod instruments that carries a bit of a medieval flavor and eventually hints at the melody form the first piece. The final cut begins with a hazy, rich section, various tonalities overlaid with mostly strings (including autoharp, I think, and voices) and electric keyboards. After several minutes, the strings introduce a winsome melodic line, again with a vaguely Asian inflection, soon settling into kind of a lounge situation, replete with delicate cymbal taps and distant, soft wah-wah, the music having traveled somewhere into the vicinity of Bryars' "1-2, 1, 2, 3, 4", disorienting but disarming at the same time.

A fine work, extremely pretty, and I use that term in the best possible sense.

"Endless Conjecture", a cassette release, sports pretty much the same instrumental form (dozens of them, all played by Storring) but much of the resultant music is rather different. A brief opener has gently wailed vocals, stray plucks and, gradually, a welter of other sounds, all amorphous and a bit murky, but with an intriguing feeling of something being swaddled, some core remaining invisible. "Terminal Burrowing" occupies the remainder of Side A and begins with far more abstract fare than the music heard on "Gardens", kind of a laminal approach. But about five minutes in, it suddenly becomes almost orchestral for just a few moments, recalling Xenakis. It becomes somewhat episodic after that, several of the intervals very attractive (including a wonderful and surprising tumble of metal exploding beside a delicate harp) but having only the most tenuous of connections; I felt the need for more of a spine. "Dewclaws" is an amusing march of sorts, led by percussion with a slightly Partchian tinge, a great deal of fun. But my favorite track is the last one, "They Carry Light", where Storring once again gives his melodic tendencies fuller rein, seeming to give a nod to Ellington ("Fleurette Africaine") with a gorgeous, wafting piano line embedded in sympathetic though by no means entirely subservient strings. As with the longer track on Side A, several divergent episodes are encountered along the way but to me, they somehow seem to be more of a piece, to have a relatedness to the central theme, though I couldn't pinpoint that if asked. When the theme proper reemerges a few minutes from the end, the effect is spellbinding, just lush, warm and full. An excellent piece.

I might prefer "Garden" by a smidgen overall but both recordings are well worth investigating. Looking forward to more from Storring.