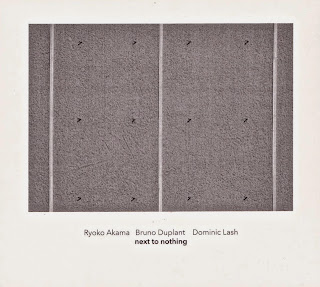 The latest in an ongoing series of long-distance collaborations involving Duplant. I still find myself going back and forth on the idea but, at the very least, Duplant (percussion, tone generator) chooses some fine musicians with whom to interact over horizon, here Ryoko Akama (VCS3 and Dom Lash (double bass, clarinet, laptop, percussion. I say, "Duplant" as I get the sense that the instigation of the project was his but the disc contains four pieces, one each by he and Lash and two (or two variations of one) by Akama.

Duplant's "a field, next to nothing", while presumably knowingly playing on the English translation of the Ferrari work, has nothing to do with field recordings (though there is a bit of knocking about in the middle distance on occasion) but rather is a text score that, from the result, seems to strongly urge held tones of given durations as the tones generated by the performers roughly (not precisely) overlap with 8-10 second pauses in between. It was written with the trio of Antoine Beuger, Jürg Frey and Radu Malfatti in mind, so its Wandelweiser-esque nature is no surprise but the tones chosen are extremely warm and inviting, sliding around each other gently, caressing, the pitch shifts often subtle but sometimes, as at about the 20 minute mark and again just before the piece's conclusion, distinct enough as to acquire some drama. A lovely piece, well realized, no complaints on non-physical presence from me.

Akama offers "grade two" and "grade two extended". Three disparate sounds quickly emerge: a pure electronic tone, a struck bell or other metal, quickly damped and a plucked bass. This relatively granular (large grains, though) approach contrasts well with the preceding work in one manner but also carries forward a similar overall feel, one of sustained, serene contemplation. There's an odd conversational, even questioning aspect to it, almost like people speaking three different languages but amiably, relaxedly, attempting to communicate. Despite the titular similarity, Akama's second piece sounds nothing like the first, the elements consisting of static, a fluctuating tone and deep, bowed bass and being more contiguous to each other, wavering but never ceasing. The cross section of textures is appealing, but I somehow wanted to hear more shape in the work's structure.

Lash confronts the reality of the situation by titling his contribution, "three players, not together". Though it begins in an area similar to Akama's "grade two" it quickly shifts direction and ends up standing somewhat apart form the other music; it's also my favorite track. A rough set of clicks intrudes, slows down, stops. Underlying billows of troubling electronics weave through high, almost brittle scrims, halt, pick up. A chime sounds in the darkness, an organ-y chord emerges. It's almost cinematic, with an edge of the surreal and random, very dark and oily. It's strong and uncomfortable. The other pieces are fine but this was needed as a tonic, a different take on long-distance cooperation, perhaps and an impressive job.