Watson seems to me to deserve almost equal billing due to the nature of this release. Davies and Butcher performed in January 2014, at Routing Lynn, site of some ancient Northumberland rock carvings, where they were recorded by Watson. A couple of months later, they made this recording, performing while the older tape was playing quadraphonically in the space.

The quartet aspect is occasionally audible, more with the saxophones than harp. Davies, using harps of the pedal, electric and wind varieties, tends toward producing dronelike sounds, sometimes with flutters of the sort that may have been produced via a mechanical device, like a small fan, hitting the strings. I always have a hankering to hear him work with more traditional harp styles, all the more so in a situation like this where Butcher, via his usage of feedback and, generally, his production of long, smooth tones, would seem to provide the perfect foil for some more percussive harp work. This occurs little bit and the pair do slide into more burred tones but the first half or more of this 35-minute set is a bit hazier and amorphous than I'd like to hear. A little past midway, however, several layers of added grit and roughness appear and the performance crystallizes wonderfully, climbing into a fascinating, disparate and even enjoyably awkward area, Butcher's feedback sax sounding not merely haunting but pained. Even more refreshingly, through this grimy scrim, a kind of folk melody, a very slow dirge, emerges--very beautiful and moving. The music soon subsides, the ambient sounds gaining prominence, the whole coalescing back into the haze.

For myself, considered as a whole, the attainment of those several minutes settling around the song form makes the entirety well worthwhile, allowing it to be read in an almost narrative fashion, with each element leading toward and away form those very special moments. 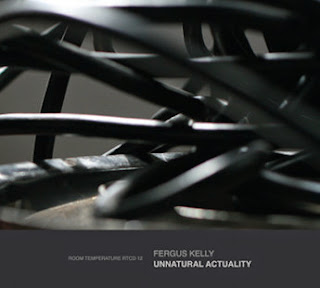 I can't resist quoting Kelly's listing of sound sources used for this release (along with field recordings from various sites): "The electromagnetic recordings were made from various sources such as computer drives, TV monitors, xbox, wii, ATMs, ticket vending machines, LED displays, smartphone, security barriers, automated advertising hoardings and tramlines. The metal percussion deployed car suspension springs which were struck and bowed, mounted on an aluminium water heater, which acted as resonator." Never a bad thing to put remnants of modern consumerism to good use.

The sounds comport well with the cover image, very dark and round. Things thrum and throb, hurling off sizzle and clang, layered and deeply resonant. supremely thick. Sometimes, as in "Spinal Landscape", it's like a thick mass of dozens of huge moths blindly flying in a room of large bells. Rhythms may appear briefly before sinking back into the inky, oily dark; spaces are scoured out, hollowed, left as a dully reverberant shell. The music might be said to vacillate between that dread hollow and an almost claustrophobic, equally alien clutter, something that begins to get oppressive over the disc's nine tracks but given the nature of the sources, I'm not sure that oppression wasn't one of the outcomes Kelly had in mind. More to the point, it's a unique and strong sensibility, one that stands well apart from most quasi-similar efforts int he territory. A strong, bitter work.