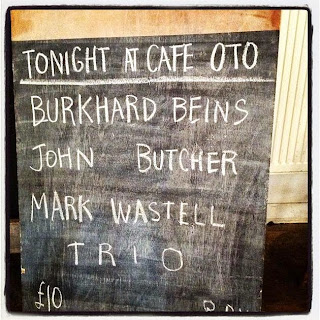 Four new, non-archival releases from Confront. Apologies for the brevity of the write-ups, but I wanted to get these done before my three-week trip to the US. No album cover images because metal boxes. :-)

A new musician to me, Shiroishi wields soprano, alto and baritone saxophones (with effects) and vocalizes a bit. He displays several clear (to me) influences, leavening them with an essentially strong lyrical/emotional core that generally manages to make coherent the freer and more loquacious outbursts. He utilizes loops, pitch shifters and other devices to, on occasion, come across as a small saxophone choir, evident right from the first piece which immediately brought to mind the old Skidmore/Osborne/Surman trio, S.O.S., both in overall sound and in the dirge-like melodic character of the piece (the album was inspired by his recently deceased grandfather). We next hear a piece that sounds like a morphing of Evan Parker to Jon Gibson, very impressively played and interpolating some surprisingly pastoral and sweet passages, then a lovely, mournful piece that recalls the Roscoe Mitchell of "Eeltwo" (albeit with very effective whistling/humming additions), though at this point I wanted to hear more Shiroishi. That manifests most strongly in "despiser", probably the closest approach to raging free jazz on the disc, very piercing and needlelike, which grows more and more fierce, sirens wailing, until vocalizations begin erupting, sounding entirely unforced and even necessary. He closes with a piece that returns to the atmosphere of the first track.

A good recording. I'd be interested to hear Shiroishi in a non-solo context and without the technological trappings, but this will satisfy many a listener.

Nyberg's also new to me as far as I can recall, playing acoustic guitar on seven of the nine cuts here, double bass on the eighth, bell and recorder on the last. The guitar pieces didn't do so much for me, varying from (inevitably, I guess) a kind of Bailey in hard scrabbling mode to modified classical and flamenco attacks, the sound kept pretty dry and non-resonant, the structures rather amorphous, even given the shortness of the pieces, between one and four minutes. Only the last one, where the strings are scraped and allowed to resonate, really caught my attention, Nyberg creating an intriguingly pitched, almost hurdy-gurdy-like sound. The solo bass piece, on the other hand, lasting over 12 minutes, is quite impressive. He has a fine, heavy sound, a dry tone that works well as he plucks and bows through a driving, sometimes frenzied performance. The concluding track with recorder is somewhat throwaway, not sure why it was included. Aside from the bass track, then, not much that made a great impression. Post-Bailey fans may disagree.

This one's a toughie. Both musicians on analog modular synths (Kahn adding mixing board and radio, Julian computer), the music is almost relentlessly gray and opaque, very few bones tossed to the listener. You realize, considering the fact, that most releases of abstract electronics (for lack of a better term) usually offer, somewhere along the way, some kind of foothold, some recognition of the need for at least a minimal bit of comfort, whether that comes in the form of a tinge of tonality, an underlying thrum implying rhythm--something. Here, much to the music's credit, there's nothing of the sort that I can hear. There are hums and such that appear throughout, pushed against the static and white noise, but they're hardly comforting, more bitter, thumbing their grimy noses at anyone looking for a bit of purchase. The second track tones things down a tad but it's still rough going (a good thing!), the harsh burps conflicting well with metallically ringing undertones. Even the barest hint of accommodation is tossed in the bin with the third track, abrasive, scouring whistles, harsh stutters, that gray scrim. Yes it's a rough haul but who says things have to be easy? Good stuff.

The first (? as far as I'm aware) oversize metal box issued by Confront, presumably to house the 4x6" photo cards included, with text by John Eyles on the reverse, documenting a live set at Cafe Oto this last April, Beins on feedback 28" bass drum, analog synth and electronics, Butcher with his tenor and soprano (with assorted feedback) and Wastell on amplified 32" tam-tam and mixer.

It begins as a fairly calm, brooding set, all the instruments generating long tones, Wastell's ringing tam-tam and Beins' low thuds offset by thin, sputtering lines from the saxophone. The trio lingers in this area for a good while, manipulating the levels with subtlety and richness, gradually increasing the volume. The texture granulizes with feathery strokes on the metal, key-triggered burbles from Butcher, the sound remaining continuous, just getting drier, repeated percussive taps from various sources urging matters anxiously forward. An abrupt cessation and collapse, matters settling down to a swiftly burbling simmer. It breaks apart further, quite beautifully, into shards of bell tones, sax feedback pops and other resonant, though short, elements, very welcome. The second of two tracks starts out in more fevered fashion, Butcher overblowing, Beins (I think) hissing furiously, Wastell churning something beneath and behind. It's unsettling, serving as a good tonic to the calmer portions of the first cut, the intensity maintained throughout, buzzes and clangs over a steady bed of electronics, feedback sax roaming above, very strong.

Overall, rather what I would have envisaged from these three musicians--intelligent work with a marked sense of corporeality and visceral presence. Make room in your oversized release shelf.