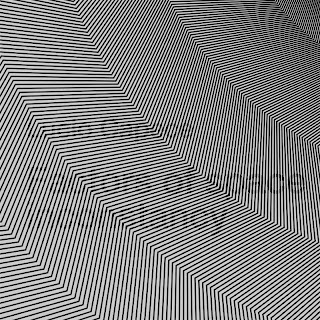 I was fortunate enough to catch Capece at Les Instants Chavirés earlier this year and to witness a piece much akin to the title track here. As with much of his recent work, notably those involving balloon-suspended speakers, there are obviously aspects of live, spatial experience that can't hope to be captured on recording. Still, there remains much of value to be heard. As well, with works like these, Capece is edging into that area which I associate with Lucier among others, where music and science merge, either comfortably or with some friction.

Two wireless speakers swinging from a bar rack is one of the elements in "Factors of space inconstancy" and a fascinating one to watch as well as listen to as the pair of globular speakers, each about three or so inches in diameter, are set in motion and go through periods of synchrony and asynchrony in unexpected patterns, the feedback they thus produce varying accordingly. Capece feeds the cassette feedback into the room, controlling it with a volume pedal at the same time as the soprano's sound fills the space directly. It's all quite complicated and, experiencing it live, I eventually gave up trying to follow specifics and just settled in to enjoy the sound waves, the same as one is forced to do here. Those overlaid waves, feedback on the one hand, fairly pure soprano tones on the other, meld closely and absorbingly, buffeted a little bit by what seems to be a small ambient rumble, apparently the hiss from the cassette (very welcome, providing air). He's trying to sonically define the dimensions of the room, something that's very interesting to ponder when one is there with him. Naturally enough, particularly stunning patches are reached when the various tones come close to coinciding, producing marvelous harmonics. Lacking the live experience and the ability to at least move your head and possibly your body, one might quibble at the length here (27 minutes), but that's a small carp.

"Eyes don't see simultaneously" lasts some 40 minutes and fills the time fantastically. For "analog synthesizers and equalizers in feedback", the piece deals with fore-and background, "a come-and-go between ears and body listening". We hear a high, two-note back and forth, very mechanical, though the tone is impure, containing a substantial burr that grows over time. Beneath this is a sporadic, deep welling thrum, the sort of sound that one can imagine, in a live situation, might disrupt one's innards. The two areas of sound wax and wane, interfering with and overlapping one another in unexpected patterns, acquiring different envelopes and pulse designs, the low tone sinking way low. Here, although one surely regrets not experiencing this over large speakers in a bigger room, the effect is reasonably approximated, enough that you get a clear, if vicarious, notion of being embedded in this sound world. There is a science experiment aspect to it, sure enough, but there's also more than enough emergent beauty to compensate. A very strong, solid, immersive work. Here's hoping Capece continues to plumb these depths.