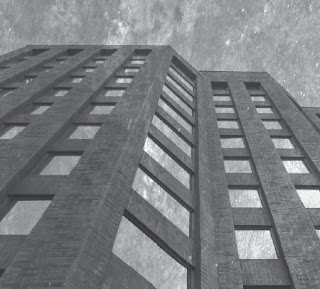 Jones had posted a few tracks of his own work over the years at Bagatellen and elsewhere but this is his first proper release, containing seven pieces developed from 2009-2013 and it's a very strong one. I've known Al for a good number of years (in fact, he and I, along with Derek Taylor, Jason Bivins and Nat Catchpole, were the original creators of the Bagatellen site) and am aware of his career work in submarines, often for months at a time, during which periods he was involved, iirc, in underwater sonics and radar. Given that knowledge, it's impossible not to hear vestiges of what he undoubtedly experienced in those nether environs in these works, replete with layers of varied hums and mysterious clicks and knocks. The music falls largely, though not exclusively, into the electronic drone category, albeit that branch where the elements are harsh verging on the industrial, the repetitions having the aspect of turbines vibrating through metal walls. The opening track, "X Malfeasant, Appropriating Y" is somewhat unique (and perhaps my favorite) in that, after eleven or so minutes of great churning and grinding, it unexpectedly (but natural seeming in retrospect) introduces heavy drumming, only for about a minute, a gambit that works quite well, opening a brief window into an adjacent world. "Parachronists" is calmer, one of those that connotes the loneliness and eeriness of (in my imagination) sitting in a metal tube, thousands of feet below sea level, listening while "endocardiums IV" departs partially from the drone, with some iterative clanging that seems almost seems an allusion to Tibetan bells, though that's probably more me than Jones. "radiator piping" rings true to its sources and is quite bleak and evocative, like most of the pieces possessing precisely the right duration, as is the case with the minute-long "Sorrento Statis". The title track (which phrase I was curious about and googled, discovering its origin in a poem by James McMichael) begins with chiming, vaguely rock-like "chords", but then descends into a furious and agitated flutter (hard not to envision undersea propellors) that disappears with alarming quickness. The last cut, "Wrought Signals", is the most disorienting and lies closer to the broken electronics/noise end of the spectrum, thick hummage interspersed with blocky interruptions of same; it's the one track I don't thinks works so well--too much surface, not enough resonance for me--but is intriguing in terms of the range it offers in opposition to the other works.

Overall, though, a fine debut, looking forward to much more.