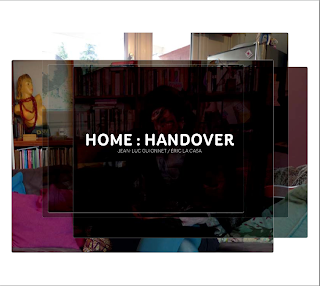 How do we listen to music at home? Not us, mind you, but other people, normal people. How aware are we of the environment in which we listen, what references do we make, how does nostalgia fit in, how would our thoughts about these matters differ from others? How would they understand these personal preferences and thoughts? What does it really sound like in our apartments, homes, etc. when we think we're listening? Some of the questions approached by Guionnet and La Casa on this rather massive, very unusual and fascinating venture, "Home: Handover".

A few words of explanation as to the release's structure: Four CDs, each an hour long. Each CD consists of four sections, approximately 15 minutes per section and each follows the same pattern, initiated by a different representative from Glasgow on each disc (Lisa Peebles, Tim Nunn, Zoe Strachan and Silvia Sellitto, non-musicians all; the first and third, incidentally, sporting Scottish accents, the second, English and the last, Italian). In the first section, we encounter the subject in his or her apartment where they discuss their music listening habits, play an example of their favorite music (during which La Casa wanders through the apartment, the strains of music growing louder or more distant depending on his location), respond to questions regarding the activity they're engaging in at this moment and, finally, wander about their abode holding the microphone themselves, having roughly the experience La Casa did just before and answering questions about their perceptions. Next, this entire episode is interpreted in a live, concert setting by a quintet consisting of Aileen Campbell & Gael Leveugle (voice), Lucio Capece (saxophone), Neil Davidson (guitar) and Seijiro Murayama (percussion) with each musician listening to the earlier recoding on headphones (not heard by the audience) and responding in a specified manner. One vocalist imitates, as closely as possible, the voices he or she hears, as closely as possible while the other provides a commentary on what he or she is hearing, taking care not to speak while the first is talking. The musicians perform one of three activities: 1) imitate estimated frequency, notes and melodies from what he's hearing and reproduce them, 2) generate sounds from rhythms, breaks or other more "structural" events and 3) Estimate the signal to noise ratio of the tape, creating "a noisy sound" on his instrument that fluctuates accordingly.

In the third section, a musician, Keith Beattie, listens to the apartment recordings (after we hear a few minutes of the ambient sounds in this new interior venue), roams through his home improvising or playing a song, answering questions and free associating, gradually making his way outside where the exterior environment "becomes the recording's only source. Finally, Guionnet and La Casa take all three recordings, overlay them (they have the same temporal structure) and present them with minimal editing, though allowing themselves the option of removing elements as they choose. I get the sense that all of these "rules" are allowed to be bent a bit.

Again, this procedure is carried out four times, once per disc. Two questions immediately arise: 1) Are four iterations necessary to present as a recording? and 2) Given four discs, might it have been more interesting (at least, more suspenseful), to have all the apartment recordings on Disc One, the concert session on Disc Two, etc. instead of four similar "chapters"? I go back and forth on these.

Let me give a brief description of one disc, arbitrarily choosing the first.

"There has to be someone who knows the best way to light a barbecue", the first words, from a television I presume, one hears" (after La Casa's cueing, "Top!", that is), before Ms. Peebles begins to describe her home, the enjoyable light therein, the various comforts. She's very accommodating and warm, not appearing too embarrassed. Her voices shifts from speaker to speaker as she moves about; American English speakers will delight in her burr. Suddenly, synth drums intrude as she begins to play her favorite song. I have no idea what it is (and find it pretty awful!--googling the lyric, it's apparently Orgy's "Blue Monday") [I'm informed the song is actually by New Order and apparently very well known, thus displaying the depths of my 80s-90s rock knowledge] but she describes the dance scene, I guess in Glasgow, around 1990 from whence it sprung. The music fades in and out as La Casa wanders through the apartment, door hinges squeaking, closing, muffling the sound, other sounds and even music (from a TV?) leaching in. A welter of sounds--laughter, new songs, chatter, a toilet flushing--you get a great sense of sonic confusion listening remotely like this, much more so that you'd experience in situ. The music abruptly ceases about 11 minutes in, replaced by a chuckle from Ms. Peebles and her thoughts on how others might view the activity in which she's currently engaged, an interesting bit of self-perception, after which she's heard holding the mic and walking about, commenting on what she's hearing from a different perspective than she's used to. One gets the sense that this kind of listening, on a more purely aural level, is something she's never done before and she also seems to take in other sensory input more consciously than normal, integrating the sonic aspects with what she sees out a window.

This episode cuts out cleanly and we shift to the performance, an entirely different feeling ensuing even as the source material is what we've just been hearing. The male voice is replicating Ms. Peebles' speech with a necessary awkwardness of phrasing as he struggles to speak while listening, Murayama tapping out irregular patterns on a drum, Capece offering the occasional soft tone on soprano. Soon, the female voice begins opining on what Peebles' apartment is like-- "I think the room is probably beige"--though this is rare as Peeble's voice was fairly constant at this point, allowing the new vocalist few points of entry. (Peebles' voice itself enters for a little while, repeating several sentences we heard earlier; I'm not sure why this occurs). As the musicians begin hearing the music, Capece more or less imitates the basic melody while Murayama pounds out the rhythm; I haven't picked up Davidson at all by this point, but perhaps I'm missing some subtlety, maybe he's playing the guitar as percussion. It's really a fascinating performance, very unusual. You might relate it to aspects of Ashley's operas, that's as close as I can think of, but not very, maybe an faint echo of Gavin Bryars' "1, 2, 1-2-3-4". It's kind of funny hearing Campbell's assumptions, generally visual, of what the Peebles apartment is like as she lets herself go in what strikes me as almost poetic license, a more enjoyable tack than more mundane approaches. "I think there's a carpet and quilts. And the quilts are pink, probably." "I think the house might smell of new carpets." Other shifts and edits seem to be occurring as well, not sure if the performance has been adjusted or edited post facto by La Casa and Guionnet. I love this track (and the like ones on the other discs); very fresh, very fascinating.

The Beattie section, as stated, begins simply with the quiet ambient sounds of his apartment for three minutes. We then, for the third time, hear Peebles remarks on thunderstorms and trees before suddenly shifting to gentle piano playing amidst the rush of traffic outside--very lovely and I like the fact that it's allowed to linger for a good while and that it remains fuzzy and lo-fi. It's not until 11 minutes in that Beattie's voice enters, describing what he's just played (he plays guitar on the other three discs) and continuing on to talk about his home, family and how he records music there. There are "marker" beeps between scenes here so the transition are quite sharp. One occurs after his brief patter as we walk outside the house, listen to the traffic. The track is relatively simple compared to the first two and works really well.

The final section, with Guionnet and La Casa working with the above material, is necessarily a kind of collage piece and I find myself hearing it in two different ways. On the one hand, there's a distance, maybe even a fussiness about it that contrasts with the relative straightforwardness of what's preceded it and I shrink a little bit from its artificiality. Considered on its own, however, it works just fine, shards of dialogue, ambient sound, music etc. intersecting with one another in unexpected ways. Kind of a stew made of known ingredients, lumpy here, smooth there. Their approach varies considerably from disc to disc, the track on Disc 3, for example, being notably quiet and restrained. "What do you think the actual audience will think about what you thought they would think?" the bland female voice inquires at the end.

The three other discs are alike in many ways though made up of entirely different material. The individuals vary a good bit, Nunn seeming to be a bit more aesthetically aware, more self-conscious and alert to the process, choosing a kind of pop tango (the band, Tango Crash) as his song; Strachan listens to light classical on BBC3 while Sellitto's selection might well test the patience of many readers of this page as Joan Baez' rendition of "The Boxer" rings through her apartment, followed by (oh no!) "Evita". But of course that's part of the charm and, indeed, an essential element of the project: people who listen to and love kinds of music that I don't and one retains a strong sense of humanity after listening to this quartet of music lovers, however different they are from you and I.

It's really an amazing and beautifully realized document. I still go back and forth on the two qualms I raised initially but I'm very glad this unique and thoughtful document exists. Everyone interested in the intersection of music and the act of listening should hear it.