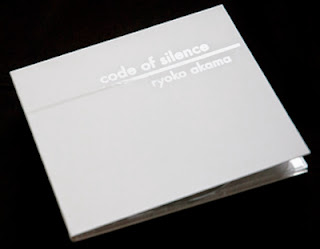 "Code of Silence" appeared about this time last year, I think, but I first got wind of it via Richard Pinnell's fine review. I eventually picked it up over the summer but between being late to the party and deluged by other releases at the time, it was unfortunately lost in the Just Outside scuffle. Happily, with the issuance of the Dawn Scarfe album (reviewed below), I have the chance to revisit it and it's well worth the reassessment.

Richard did a great job in his piece and I don't want to simply echo his sentiments, except to say that I share them. What strikes me now is how well structured the album is in the sense of several variations on exquisite control leading to a partial fanning out--not really an eruption, more a sublimation of a dense gas--in the final track, "zowa zowa". The deep, shifting thrums of "jiwa jiwa", seeming to quicken and retard imperceptibly within a supremely reverberant environment (Akama's kinship with Radigue, with whom she has worked, is immediately apparent), everything funneled tightly but as if the funnel itself had countless, complexly arrayed bumps and grooves, resulting in interference patterns spread through the sonics. "gussuri" offers something of a respite, relatively pure and quiet sine-like tones emerging and disappearing, leaving nicely round gaps of silence, very streamlined and clean but subtly irregular. As the title implies, "sotto" plunges us down into the abyss, turbulent and dark but again, channeled. The heavy, liquid lumps cascading through the black cavern emit a stream of staticky clicks along the way (that, or my speakers can't handle the sub-subtones), the entirety smoothing out a bit in the distance as the track concludes. We experience another drastic elemental shift in "jili jili", everything a high, cold sizzle, a wave of needles, sharpening as the piece proceeds. All four are fine works, very different from one another and, as said, really well controlled.

With "zowa zowa", the reins are loosened just a bit, but that slight slackening, the allowing of elements to billow outward a little, makes an enormous difference. Multiple layers of white noise, thin hums and blustery rumbles stream out. It seethes and escalates, summoning images of pre-eruptive volcanic action, gases escaping in roaring vortices, muffled explosions from the depths. The power that's been biding its time unfurls smoothly but with huge force. Surprisingly, the sound-world, towards the very end, begins to stutter into blocks of brief but complete silence, crumbling apart like lava becoming solid.

A fantastic piece and a very beautiful, penetrating album. 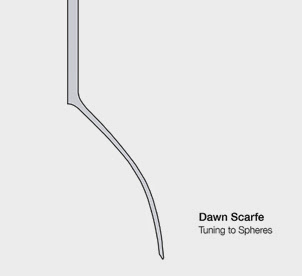 As this was the first time, to the best of my recollection, that I had heard of Scarfe, I did a little googling around and noted that many of the images of her (or that arose via her name) involved the holding to the ear of a glass globe in outdoor environments, instances of "tuned listening", as I understand it. I want one of those...Glass is a fundamental aspect of this recording as well, those good old wine glasses which we've all digitally stroked (the lovely cover image limns one side of an inverted glass). Here, however, sine waves are substituted for fingertips, broadcast from small loudspeakers suspended above the glasses' rims and attuned to their resonant frequencies. Moreover, several such are placed on a turntable which, in the course of rotating, causes beat effects not so dissimilar, I imagine, from what listeners commonly do whilst moving their heads during sine-related events. A photo of one such set-up of Scarfe's: 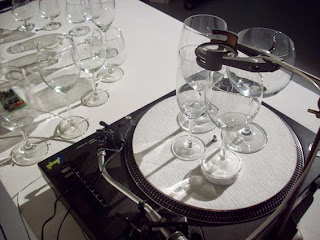 There's a certain structural similarity to the Akama disc in the sense that the first five (of six) tracks kind of lay the groundwork--very controlled sets of sound that, essentially, aren't very much different from what we've encountered with wine glasses in the past, albeit cleaner sounding and with the emergent beats due to the movement of the turntable relative to the loudspeakers. Not that these tracks are unenjoyable by an means--they're quite engaging--just that they seem to act more as introductory texts to the languages being utilized and, subtleties of beats and overlapping tones aside, are essentially similar to what a given listener may have expected going in. I do, necessarily, miss the physicality of live interaction with these sounds in space, the ability to shift pitch by personal movement (which one can accomplish in limited fashion via stereo speakers, but it's not the same), etc. Toward the end of the fourth track, there's the brief introduction of a mildly percussive sound, like a wire, say a zither string, vibrating against a piece of metal, a small hint of what's to come. The sixth cut begins with a combination of the purer tones we've been hearing and those ringing/vibrating ones. You get the sense of heightened activity, maybe faster turntabling, pushing these tones up against sonic "limits" previously unperceived. The difference in effect is slight on the one hand but really places you in a very different sonic space, more intense and agitated (you can hear what seem like little "clinks" now and again, though they might be heightened states of vitreous excitement). It only lasts some nine minutes but opens up a very intriguing world, one that I'd love to hear explored further.

An interesting recording, well worth hearing by those taken by this acoustical area.

Just a heads up: the link to the Richard Pinnell review is very much broken and leads to a rather inappropriate site! Thank you for your own excellent review.