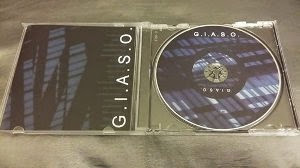 An "international online orchestra", whose members contribute remotely to a (physical) site containing, perhaps among other things, ongoing videos with which they interact, the whole shebang live-mixed by (again, perhaps among others) Julien Ottavi. The contributors are: Cdrik Croll, Jenny Pickett, Kadet Kuhne, Romain Papion, Ryo Ikeshiro, Shoï Extrasystole, William Nurdin, Emanuelle Gibello, Eva Ursprung, Philippe Cavaleri, Ottavi, Shelly Knotts, Joachim Montessuis, Erin Sexton, Brice Janin, Elpueblodelchina and Seamus O'Donnell. The sounds are entirely electronic in nature, spread over six tracks (two of them silent) recorded between "early 2013 and early 2015"[sic], in Bourges, Nantes and Bergen, with no indication which musicians appear on which tracks, not that it matters.

Apart from the obvious caveat that one would necessarily need to experience this live to get the full effect, the sounds here are both varied and immersive. The opening track falls into the sort of area I'd expect going in, an amorphous, dense cloud of fairly aggressive growths, a kind of loose free-for-all, chaotic but with the "formlessness" of a natural system, a pile of stones or plot of weeds. Various disparate sounds enter and leave, some droning, others clattering; I'm curious if the participants could hear the totality of what was occurring or not, whether they had the opportunity to consider or not consider how their sounds integrated with or affected others. Then again, since someone is also live-processing the various inputs, it's hard to know how it would have sounded in situ, so better to simply go from the disc. There's a welcome dynamic variation among the tracks, some, like the third, arriving at a particularly sumptuous low level, the sounds circulating like swamp gas over a moonless pond, really fine. The fourth is nicely abstract and hesitant, including voice grabs, obscure percussive noises, bell sounds and various hums, the kind of assemblage that, if heard unprocessed from multiple sources, would be a good example of long distance reticence, very impressive. Repeated listens elicit a great amount of detail and sound relationships, one's brain going about its pattern-recognition way regardless whether one exists or not, which is quite enjoyable. As is the recording on the whole, as good a job of replicating the events, I imagine, as is possible on disc form. Not as much pure noise as I might have anticipated, which I appreciated here--more light, less opaqueness. A good job.