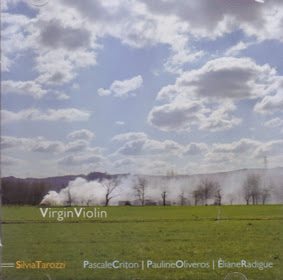 Earlier this year I was fortunate enough to attend a concert at the Italian Cultural Center with this same program, performed by Tarozzi and cellist Deborah Walker. Tarozzi performed the Criton piece solo, the pair combined on the Oliveros and Walker played the Radigue, a lovely evening. Here the violinist assumes all chores and the result is a largely very strong, quite varied recording.

Criton's "Circle Process" (2010) is written for violin tuned in 1/16th tones (much of her music is for instruments tuned beyond quarter tones) and, as the title suggests, is played by the violinist bowing in generally circular patterns, though decisions regarding duration, starting and stopping points within the score, etc., are left to the performer. The work begins with whispers and gradually grows more complex, not with regard to the bow movements but form the increasing interactions of the micro-tuned strings, which begin emitting all manner of ghost tones, flute-like sounds, jew's harp evocations, etc. There's a very dry, powdery aura in effect, the bow pressure causing single sweeps to range from wispy to resonant, all very tactile and corporeal. The piece seems o be about the navigation of the performer through the subtleties evoked by the tuning, pausing or forging on as she see fit, eventually ending near the starting point, though the whispers now contain more air, carry a greater respiratory character. Very impressive and a work that reveals new relationships on each listen.

Apart from her amazing tape work in the 60s, I've previously fessed up to not being a huge fan of Oliveros. Granted, I've never thoroughly investigated her music but what I've heard over the years and having seen her live three times, in three different performing situations, hasn't led to a change of mind. Nor does the piece included here, "Thirteen Changes: for Malcolm Goldstein" (1986), in which Tarozzi, in addition to violin, contributes field recordings and sounds from toys, stones and a music box (which plays a Butch Morris piece0 and is assisted by Massimo Simonini on electronics and mix. Oliveros' voice is heard in the final section, listing the titles of the individual sections (many of which carry the new-agey aura that puts me off much of her music). Given the structure, it's necessarily episodic but generally reads as a string of effects, with a bit of wackiness thrown in. There's an oddly free improv feel about some of it; that is, free improve circa the late 70 or 80s. The ninth portion sounds weirdly like Fred Frith from his 1975 Guitar Solo album. Other parts recall David Moss, Derek Bailey, Nicholas Collins and others. None of it "bad" per se, just hard to get behind in anything but a conglomerative way and to remain impressed by Tarozzi's dexterity in negotiating the terrain.

But then there's Radigue, represented here by "Occam II" (2012). I may be as biased in favor of Radigue as I am against Oliveros, but so it goes. As with most of her pieces for stringed instrument, it's "simply' the back and forth bowing but the sounds thus elicited are anything but simple--magical instead. The quavers, the pulses and the pure gorgeous sonics of the bow patiently sliding over the strings are almost enough. You get the sense that it's only through extreme concentration via repetition, extreme honing of touch that harmonics (or a combination of harmonics and high strings lightly stroked?) begin to emerge, dancing ghostlike above the arco drone. Worlds unfold. Recorded well enough that you easily hear multiple layers from the actual touch of rosined bow on strings, up through the mid-range "true" notes encountering those delightful, plaintive plucked notes to those tones you're not sure are on the recording or only in your ears (no difference, of course). A marvelous piece of music, beautifully played.