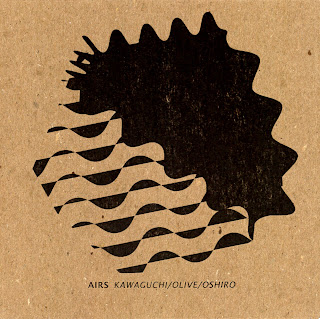 It's something I wish would happen more often in this neck of the woods: the consideration, however much abstracted, of song form. As a general notion, it seems to me that a kind of pendulum swing tends to produce unusual and often beautiful results in these kind of situations when musicians spend time investigating more rarified regions (noise, post-AMM, etc.) and then bring back what they learn there to view a more "traditional" form through this newly enhanced lens. An example that has always stood out for me (among many) was a John Butcher solo performance from around 2002 where, at the end of a given piece, there lingered a sense of "song" in the air, regardless of how non-linear, abstract, etc. the playing seemed to be on the surface; quite magical.

The trio at hand more or less states this intention up front via the disc's title and further, in the accompanying notes, mentions the compositional aspect of the four pieces, if only in the sense of "general guidelines related to form, time, sound sources and density". All three musicians (Kawaguchi, and Oshiro on "self-made instruments", Olive on magnetic pickups) Have done very fine, very exploratory work in the past, Kawaguchi notably with Taku Unami on "Teatro Assente" (Erstwhile), Oshiro earlier this year on "Phenomenal World" (Hitorri), to name only two that I particularly enjoy and Olive on numerous past releases, collaborative and solo, so there's an extra level of appreciation for this set of quiet, relatively friendly tracks that make great use of silence, quasi-rhythmic elements and occasionally gentle, near tonal sounds, all combined to produce that feeling of ineffable structure that might be thought of as "song".

How this happens, I've no idea. True, the sounds themselves are less harsh that you might expect though there's plenty of edge and rawness in, say, the opening metallic scrapes on the first track or some soft groans on the third, but they're deployed in such a patient manner and spaced so well that they're somehow capable of being interpreted as sung verses (if you're so inclined; I think I would have felt this way without the album title as a clue, but who knows?). As well, there tends to be either some spare sustained tones weaving through the mix or thin percussive ones, presumably including some aspect of Kawaguchi's wind-up devices (one in use on the second track, perhaps not even his, sounds like one of those figurines of a monkey clapping miniature cymbals). These, or some approximation thereof, provide sequences of ticks or clicks that help form a (temporary) framework of sorts, rickety here, more solid there. The basic calmness in effect throughout, gently accented by these merest nods to wisps of tempi and melody are more than enough to impart that songlike feeling. That and the unhurried but flowing deliberateness.

I'm afraid I'm doing a poor job at communicating how this music actually sounds but maybe that's the nature of the beast. Just try it--it's unique, wonderful and oddly adventurous in its (very) partial reversion to form. Oh, and fantastic cover image by Kawaguchi!