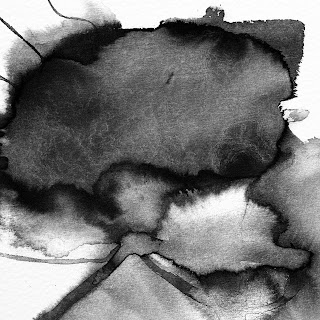 A very enjoyable, thoughtful collaboration, but one of those where it's difficult (for me) to say too much about it. As I understand it, Olsen sent an image he'd created to Noyes who, in turn, working with a no-input mixer, responded with the initial layer of sound to which Olsen then affixed (a verb that seems somehow appropriate given his work as a painter) other sounds of a non-electronic nature. Somewhere during this process, Olsen learned of a stroke suffered by his 40-year old friend, Craig, and incorporated his thoughts on that event into the project.

The result is some 49 minutes of quiet--generally very quiet--but prickly music that conveys, for me, a great amount of tautness and tension. Small crackles, delicate (though often harsh, in a tiny way) hums, the odd bang or breath. It's "not there" to a degree that you can easily lose track of it but I think, if so, there would still be a vague sense of disquiet imbuing the room. Perhaps the sounds, as they emerge, might be analogous to the unblacked-out portions of the triptych painted by Olsen (see below). A subdued, wooly vibration comes through in the waning minutes of the piece, like a generator from the next room with occasional power surges. There's a bit of a surprise a couple of minutes before the end, when we encounter, out of the blue, a loop of some orchestral music, vaguely cartoony in nature, before that fuzzy throb resumes dominance, ending curtly.

A fine, contemplative recording, tough going or not depending how one chooses to listen. Not to mention another great cover by Jamie Drouin.