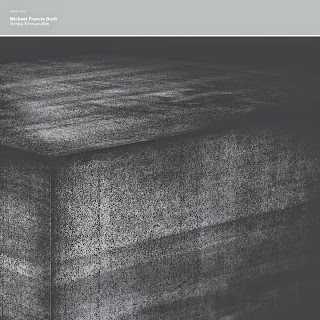 Duch continues to impress, even amaze, with this May, 2013 solo concert though partial credit is in this case surely due to the venue: Oslo's Emmanuel Vigeland Mausoleum, whose extraordinary acoustic qualities are taken full advantage of. There's just one piece, fairly short (a bit over 28 minutes) and occupying territory not so far, in a way, from some of Eliane Radigue's work, notably "Naldjorlak I" (solo cello) in the sense of broad, incredibly complex drones being generated by slow, deep, back and forth bowing. But whereas Radigue's piece restricts the musician to a very narrow range of tones (nonetheless revealing the enormous complexity of sounds that lie within), Duch, improvising, spreads things out just a little more, though where the bass playing leaves off and the effects of the room begin, it's impossible for me to say. Some of what you hear sounds virtually impossible to have emanated from an acoustic instrument. Wave after wave of intense, thick strands, draping across one another so richly you want to reach out and run your hands through it. The initial hyper-low drones give way, about seven minutes in, to similar workings at a slightly higher pitch, perhaps more focussed and "pure" sounding, but again with the vibrations being hugely enhanced and otherwise beautifully changed by the room. Really, some of the most incredible music I've ever heard emerging from a bass. There's a section of more rapid bowing, though never coming close to anything frenetic or crowding followed by, some 23 minutes in, Duch introducing a little chordal singing, another element melded into the mix, not sitting atop. The final few seconds find Duch ascending into the bass' upper reaches, a floating tendril at the end of a deeply rooted organism.

Easily one of the finest solo bass recordings I've ever heard. Mandatory listening. 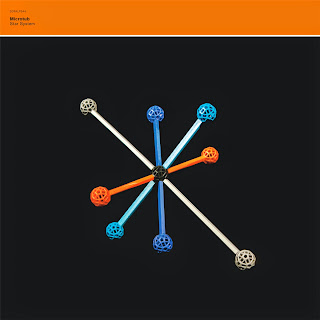 A very intriguing pairing with the above release, dealing as it does with deliberate, patient explorations of deep register spaces, in this case naturally enough as we're listening to the microtonal tubas of Robin Hayward, Kristoffer Lo and Martin Taxt. And it's very nearly as enjoyable. Two pieces organized by Hayward, each a 3D graphic score using models made with Zometool parts (a "toy" construction product that can be used to create some wonderful structures, including some of the buckyball variety), the balls or nodes representing pitches and the struts connecting the nodes, "musical intervals". I can't say I'm able to discern a lot of structural difference between the two works; each about 20 minutes long, each consisting of mid- to low range, fairly pure tones from the tubas, long-held and overlapping. But that in no way diminishes their basic gorgeosity, especially with regard to the layerings of those microtones and the pulsing and ghost tones that emerge. Very fine work and a nice counterpoint to Duch's recording, less emotionally stirring but, perhaps necessarily, more grounded. Deeply embedded, even.

I checked out the samples of the Duch release on Sofa's Soundcloud account…it sounds fantastic, as you describe. However I'm flummoxed by the label's decision to release this only on vinyl. Nothing wrong with vinyl, per se, but the piece is 28 minutes long…why put it out on a format that requires interruption half way through? I'm considering, then, pickup it up as a digital download (something I'm normally loathe to do) but was wondering if you had on opinion on the issue.

Thanks, btw, for bringing this release to my attention…great write-up as usual.

It's both LP & CD--I heard the CD versions of both.

My copy of the Duch arrived here today. In my opinion it turns out to be the perfect release from a format perspective. There are both vinyl and CD discs inside the quite beautiful twelve inch sleeve. As someone that prefers CD to vinyl but misses the larger canvas for sleeve art this one hits the spot for me.

I might get to listen to the music soon as well.

I was thrown by the listing on Forced Exposure, which only mentions the LP. I ended up ordering it from Metamkine...I'm only getting a CD, but that "twofer" pack does sound nice!