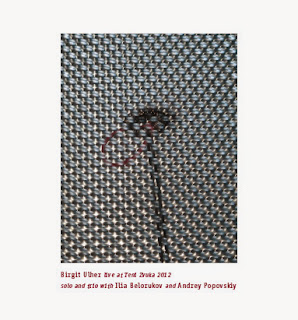 Ulher's set begins with some of the most purely percussive playing I've ever from here, I think, the trumpet at this point more resembling a snare drum. From there, she constructs a 24-minute piece that fairly zips by, one limber idea after another. It's hard for me to pin down in any quantitative way but although Ulher uses many approaches to her instrument that are apparently similar to, say, Greg Kelley, something about her music always sounds unique, sometimes nervous and slippery, sometimes strangely calm despite the rapid succession of attacks. It's marvelous work, some of my favorite music from any free improvising trumpeter.

The trio piece, only 12 minutes long, is a quiet, percolating track, with Belarukov and Popovsky contributing subtle enough sounds that it almost seems like Ulher with accompaniment, but their music really enhances hers and also impairs a fine sense of the space they're inhabiting, the trumpeter's metallic screeches floating atop the softly bubbling/prickly electronics. Good stuff, solid release. 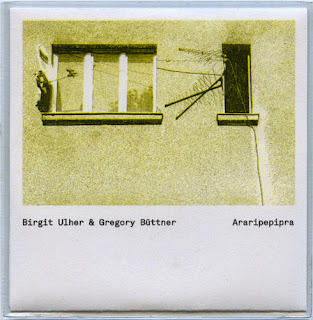 It's a bird. :-) The titles of the other seven tracks refer to creatures as well, some near extinction, some extinct, some crypto-zoological. It's tempting to hear the sounds generated by this pair (Ulher--trumpet, radio, speaker, objects and Büttner--computer, loudspeakers, objects, fan) as evocative of real or imagined sounds created by these animals--actually, it's rather fun to do just that. The pieces are in line with what I've previously heard from each musician, individually and as a duo: fairly active, bubbling, possessing a fine sense of timbre and pacing. "Kongamato" stands out for its long tones, very welcome; easy also to imagine them accompanying the titular pterosaur in flight. Good, crunchy, imaginative music, another in a string of strong releases involving Ulher, a musician who listeners should definitely check out if they haven't already. 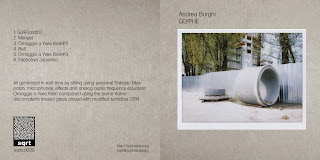 A short set of six pieces on this 3" disc by Borghi, constructed via software, microphones and other effects.

The music is quite subdued,ranging from soft crackling to sustained, quasi-ambient, near-tonal hums, to ringing metal tones embedded in liquid splatter. Each brief track is discrete and self-contained and each is a very enjoyable nugget, often bearing a beguiling percussion/electronics feel. On the one hand, there are sounds and ideas here that I'd love to heard explored at greater length but on the other, there's something very satisfying about the notion of a delicious morsel. A small gem well worth hearing.