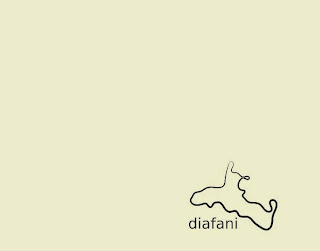 [a little strange including a cover shot as all diafanis bear the same cover image, but...I just realized the drawing is the boundary outline of the Greek village of the same name.]

A construction created, going from the description printed on the actually disc, by the overlaying of two compositions: Duplant's "l'entendue des possibles" on which he plays organ and Thut's "one and three boxes 1-3" where Thut plays boxes and zither. As far as I can tell that's "all" there is to it, a kind of process music, I suppose where the initial choice of recordings is made (I'm guessing by Duplant) and the results unfold. One may have had some confidence going in that the selection was a workable combination; both pieces are quite spacious and transparent, the Duplant tending toward long, low tones and the Thut carrying more of a percussive feel, the distant sounding taps and thuds heard sporadically, separated by substantial space. Permeating both (I think) is the ambient sound from the respective rooms in which the originals were recorded. All well and good, but how does it sound, listened to "innocently", as a standalone work?

It works just fine, in fact, very mysterious and immersive. The organ tones, which aren't continuous but are of long duration and are much more often present than not, form a shifting matrix, both in terms of dynamics and pitch, somehow giving the impression the room, its rough boundaries and shape, while Thut's activities with the boxes and zither (the latter, so far as I can discern, not strummed in any traditional manner, perhaps used more as a resonating box? or maybe e-bowed) are heard as occupants therein, rather perceived as from a distance, figures scurrying or ambling about or maybe even as animals going about their business. The disc works extremely well and, more, it's an example--not unique but worth pursuing--of an approach that stems from Ives through Cage and beyond of hearing several things at once. Here, the transparency of the result reminded me of Cage's overlaid score sheets for "Atlas Eclipticalis" as well as my (and I hope, many people's) habit of opening a door or window to the outside world while listening to music, especially that of the Wandelweiser group. It's music that sounds open to everything. The chance occurrences and congruences are the crux; chance but, by their original nature and sense of life, accommodating.