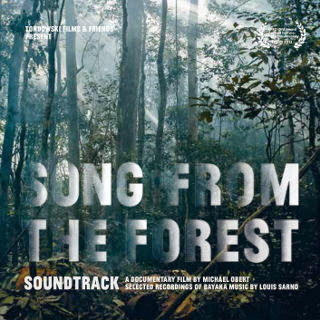 Selected recordings from the soundtrack of Michael Obert's documentary on the Bayaka Pygmies of the Central African rainforest. Some 25 years ago, Sarno, enchanted by music he'd heard on radio from this area, ventured there and ended up remaining, adopted by the Bayaka. The film, as I understand it, documents Sarno visiting New York City with his son, Samedi, 13 years of age.

The soundtrack album presents fifteen tracks culled from some 1,500 hours of recordings. I imagine many of us have heard various Pygmy music over the years though, speaking for myself, as entranced as I've been by what I've heard, I really know very little about it (even saying "it" is likely pretty stupid as I'd suppose there are myriad kinds). The collection makes no claims as far as being representative and, approached thusly, as a sample of music and sounds that Sarno has experienced, it's rather extraordinary. The jungle is always present in the form of insect and bird calls, sometimes, as in the track "Women Sing in the Forest", the dominant element, the human contribution all but lost in the swarming cloud, other times, that's all there is. There's some extraordinary "tree drumming" as well as the better known and no less amazing water drumming. There are flutes, "earth bows" (a bent sampling with twine played over a hole in the ground acting as resonator, sounding like a bass doussn'gouni), bow harps and much singing, especially lovely when employing their version of hocketing ("Lingboku Celebration"). Really a wonderful document with, thankfully, none of the sense of cultural imperialism one often finds, doubtless due to Sarno's commitment to and immersion in the culture. Fantastic music and sounds, highly recommended.