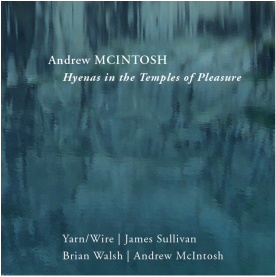 Andrew McIntosh - Hyenas in the Temple of Pleasure (Populist)

Let me say at the outset that I find this recording very exciting and extremely enjoyable. But it's also the kind of music that I feel somewhat ill-equipped to discuss, especially on a technical level as its elements, insofar as tunings and structures, are really beyond my (limited) expertise. That said, some descriptions.

The album contains two sets of suites by McIntosh, "Symmetry Etudes" (a set of eight such, amazingly performed by a trio of James Sullivan and Brian Walsh on clarinets plus the composer on violin) and "Hyenas in the Temple of Pleasure" (in four sections, played by the ensemble Yarn/Wire, with Laura Berger and Ning Yu on pianos and Ian Antonio and Russell Greenberg on percussion). Four of the "Symmetry Etudes", V, II, III and IV, are heard first, then the quartet suite, followed by Etudes I, VI, VII and VIII.

The "Symmetry Etudes" are relatively short, between about two and twelve minutes and varied in their approach; in some, the symmetrical character is apparent (though never too formulaic; there's a tinge of Tom Johnson in play, I think, but nothing as overt as his pattern pieces), in others it's obscure, if present at all. Several things are immediately striking. One is that, despite McIntosh's history of having worked on occasion with the Wandelweiser group, the voicings of the instruments are "traditional" in expression, if tuned in just intonation. There are none of the breath tones in the clarinets or whispery bowings on the violin that one has come to almost routinely expect; the sounds are robust and full-throated with a deep sense of reediness and all things rosiny (just the combination of two clarinets and violin seems to afford a special kind of sonic deliciousness), the music urgent but not strident. McIntosh remarks in his notes that he chose the more emotive readings of this series for the recording, something that doubtless enhances the latent Romantic aspects of the music, the kind of thing I've picked up in much of Jürg Frey's work, more overtly vivified here. There are moments when the combination of tonalities and plangency here recall, for me, Gavin Bryars around the time of "After the Requiem", but this is better, without a shred of kitsch. Even the more "skeletal" etudes, like the fourth, have a resonance that lingers far beyond their scalar aspects. The entire set is probing, intelligent and, simply, sensually gorgeous.

McIntosh opines that the title work represents a major advance in his compositional history, a kind of freeing up with a greater use of intuition and less of a reliance on systems or elaborate tunings. Still, the percussion, including pipes and wine glasses, incorporates an amount of tuning in just intonation and indeed, bear echoes of Partch's Cloud Chamber Bowls (a beautiful sound). The structure does, in fact, seem "looser" (not flaccid) than the etudes. The pianos (at least partially prepared) and percussion weave amongst each other, a pair of twin strands, aligning, parting, blooming independently; there's a dreamlike quality in much of the work, very absorbing and almost numbing. Hard to elucidate the structure but I sense it in there, very organic.

Well, that's about the best I can do now though I feel I'm giving the music short shrift. There are a couple of samples available at the bandcamp site below, but do yourselves a huge favor, pick this one up and hear it all. One of the most enjoyable things I've heard this year.