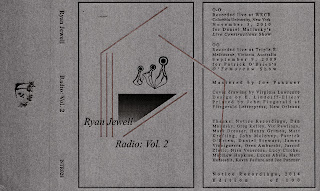 A common complaint I've had over the years, especially, as it happens, with percussionists, is their reluctance to concentrate on one area or aspect of their instrument for extended periods. Jewell has no problems in this regard. Often a "regular" drummer as nearly as I can discern (I believe I've only previously encountered his work in a collaborative context), on this cassette release he engages in two lengthy explorations of "limited" territory with fine results. I'm not precisely sure what elements were used here but it seems to be some mix of electronics and percussion, or at least percussion-sourced recordings. On the first track, "O-O" (recorded in 2010), the world is one of acid sizzles and a rough, rubbed sound that occasionally grows into quasi-vocal moans that remind me very much of the nocturnal, unconscious murmurings of Robert Ashley in his "Automatic Writing" and is similarly disturbing. It's not that shifts of focus don't occur; they do, but feel absolutely appropriate, like moving smoothly to an adjacent, related space, here one where the rubbing becomes more vivid and stone-like, achieving a fine, near-chaotic state, ending with a couple minutes of soft, brushy sound and a punctuative clunk. The second side of the cassette, "OO" (2009), sounds more purely percussive to me and is even more concentrated, Jewell producing, through rubbing both smooth and rough, wonderful nests of sounds existing somewhere between tones and rapid rhythms, rising periodically to a frightening wail. He spends the entire cut right in almost the same spot, not generating anything new or spectacular but, better, letting the richness of what he's initially discovered sink in. That's something I greatly appreciate, wish it happened more often. 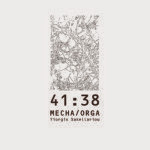 Consisting of two earlier pieces that Sakellariou exhumed and reworked.

The first begins with in extremely rapid tapping, as of a hard rubber ball on a wooden surface, but far faster and more regular than humanly possible. It sounds like more than one item in action, as what begins as roughly synchronized slips in and out of rhythm, creating small wavelets of patterns; really great. The same rhythm is eventually replicated in light, metallic fashion for a little while, again to wonderful effect. The ball-like object drops out, the metal lingers then collapses into an entirely other sound-world, all dark, cavernous hums with a mysterious, misty aspect, but it returns with a vengeance a few minutes later, now supported by this subterranean rushing river. Once again, it subsides into the dark, but a more troubling one, boiling a bit. A fine track, great to hear with one's head between the speakers.

The second track sounds almost as though it picks up at the other end of that underground tunnel, the liquid bubbling up into an adjacent area, building to a roar and, as before, collapsing, but this time into an urban environment, some bustling business, maybe the back room of a restaurant, boxes and such being tossed around. The scene abruptly skews and we're (I'm imagining) inside a moving truck, its contents (bottles in baskets) jouncing against one another, an odd, repeated, tonal two-note pattern permeating the air (many loops in effect here). A vast rush of sound, that pattern still dimly heard, like two distant marimba notes.More shifts, always clearly in human territory, maybe airports. Thing get a bit hazy here and, to me, don't quite cohere as well, but it's never boring, just disorienting, which might not be a bad thing. The piece returns to form with a particularly brutal, mechanical loop, really excellent, before drifting off.

I think I'd only previously heard Sakellariou in partnership with Julian Ottavi. Glad to have made a reacquaintance here and am curious about his other work.