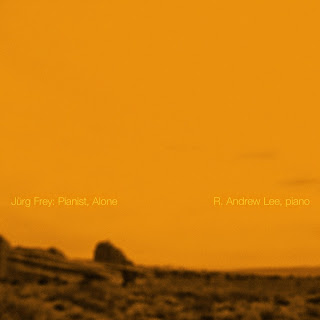 Two fascinating pieces by Frey on this double CD, (listened to on download by yours truly), beautifully realized by Andy Lee, but fascinating for different reasons.

"pianist, alone (1)" lasts for almost 90 minutes and consists of a series of discreet episodes. Will Robin's excellent notes on the site below do a far better job of describing things musicologically than I ever could, so I'll give a few other impressions. The opening chord sequence provide one of the most haunting and lovely sets of sounds I've heard in recent years. The chords are held for about five or six seconds, very luminous and clear. As they end, we hear, seemingly in the middle distance, the mechanics of the piano, in this case (I think) the action of the pedals, a soft, almost crunching sound but one that contains a strong aspect of respiration, as though the instrument is taking a breath between chords. This resurfaces several times over the piece's length. You also come to realize that other ambient sounds in the room are audible: various knocks and perhaps even the odd grunt from Lee. These elements are especially wonderful given the stately nature of the work's progression, supplying a nice dollop of chaos. That calmness pervades, whether the pianist is asked to plunge to the keyboard's depths letting the entire piano frame vibrate with those low, low chords or single, high register notes (with offsetting pedal or lever action). Lee, as in earlier work of his I've encountered, is a master at subsuming his ego, truly disappearing into the music. Enough so, in fact, that another thought occurred to me, not a complaint, really, just a consideration. I began thinking of my feelings about recordings of Manfred Werder's music based on lines of text, the notion that documentation of the scores often strikes me as less on point than actually performing them oneself, especially given that there's nothing inherently musical about them in a professional sense (though the texts often certainly connote a kind of musicality, abstracted). The first version of "pianist, alone" requires, it seems to me, a minimum of pianistic dexterity (though the quality of touch might be pertinent); it seems more involved with the physicality of the instrument and the performer's experience of same. As lovely as it is, I get the sense that a more thorough, rich experience would be had by the listener, regardless of technique or lack of same on the piano, playing it his or herself. If I ever get a piano again and can access the music, I'd definitely give it a try (likely played at one quarter tempo). In the meantime, this will suffice quite nicely, thank you. It's a long haul, meditative and embracing.

"pianist, alone (2)", clocking in at a scant 30 minutes, is a different creature, bearing some of the latent romanticism I tend to detect in Frey's music in a more overt manner. The atmosphere is the same, the mechanism heard working away, but while still calm, the tempo is varied, non-repetitive, and an allowance seems to be given for the emotional attachment of note to note, phrase to phrase. In some respects, it reminds me of a longer and more abstract version of Howard Skempton. The low figures are more brooding--how easy it is to get sucked into associative forms! How difficult to separate the physical actions of the keys from the automatic connotations the notes evoke. Approached this way, after the "lesson" of the first composition, I feel a fine tension, a healthy questioning of perception.

A marvelous recording and a great addition to the canons of both Frey and Lee.