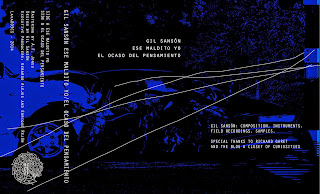 I should say right off that one of the central referents in these two works (each a side of the cassette) is going to be pretty much lost on me: doom or black metal. The pieces were constructed by Sansón knowing that this music had been a driving influence in the musical lives of label owners Gerardo Alejos and Enrique Rejón, presumably for the composer as well. As one who does all that he can to stifle a chortle every time he hears the de rigueur, pro wrestling vocalizations of the genre, the frissons of extra pleasure some will undoubtably derive herein are, regrettably, absent for this listener. That said, there's much to enjoy. "Ese maldito yo" is a kind of drone, but one composed of what seems to be several field recordings of rain and thunderstorms over (again, I'm assuming) samples of metal chords, presented as cavernous, echoing roars, though buried firmly within the mix, behind the weather. I sometimes get the mental image of a forlorn metalhead, standing in the rain outside the performance arena, hearing the music reverberating through its exterior walls. Beginning several minutes in and then weaving its way throughout the remainder of the track, is an odd squiggle of keyboard that reminds me, even more disjunctively, of Don Preston's ring modulator work on Escalator Over the Hill though, given my impression above, I tend to hear it as, say, a moth batting around a streetlight on that rainswept corner. The situation being thus formed, it kinds of sits there and stews for its second half, immersive but/and stagnant. "El ocaso del pensamiento" is more dreamlike, grittily so, and for me more successful. It starts with a grimy hum including dull, heavy chimes (guitar?), smoke-filled and somber. The sounds splay out a bit, almost as if exiting a foggy, dark interior and entering an equally foggy and dark outside. Almost halfway through, a violent intrusion of heavy drumming arrives (metal-derived, I take it, several samples overlaid, I think), barreling through the mist, reaching a kind of fractured, Branca-esque intensity. Things settle into a nighttime soundscape, flies and crickets, with some surprisingly plaintive guitar, Rypdalian, before it all just melts away. An evocative piece, quite moving in a way. And an interesting, subtly strong release overall, easily recommendable even if I'm likely missing and/or not appreciating any number of reference points.

The image of the metalhead standing in the rain outside a loud concert is a beautiful one, Brian! Thanks so much for the review, as always.