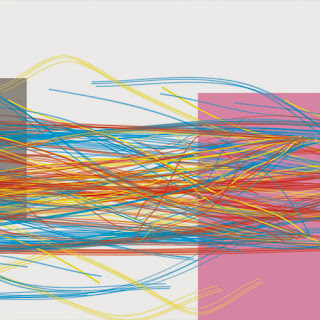 An odd set, this and one with a strong sense of pushing the music with an unlikely (in terms of contemporary improv) instrumental pairing. If I've ever heard Kahn on a regulation drum set before, I can't recall it, but that's where he is for the better part of this session. I guess it's been a while since he's wielded the hyper-intensely struck gongs and metals, in recent recordings that I've heard opting instead for electronics or field recordings, so this is a surprise not only for him, but also in the context of working with Eubanks. Again, my experience is doubtless incomplete, but I've almost always encountered Eubanks in a more abstract or "broken" electronics environment, one where a drum kit would generally seem out of place. Here, in addition to his electronics, radio, etc., he wields soprano sax, evoking, almost reflexively, jazz-oriented sets from Coltrane/Ali onward. And Kahn's drums do indeed often--by no means always--refer to that tradition, risky behavior in some circles. Managing to skirt the imitative "dangers", if you will, that lie along that route while still progressing along an ideally non-idiomatic pathway is no small feat and I'd say the results are mixed here though by no means uninteresting. There's good variation in density levels, welcome timbre fluctuations from the electronics and each of the pieces (six, between five and eight minutes in length) all flow very well, again in a manner somewhat akin to good free jazz. Not what I would have expected coming in, but perfectly enjoyable. 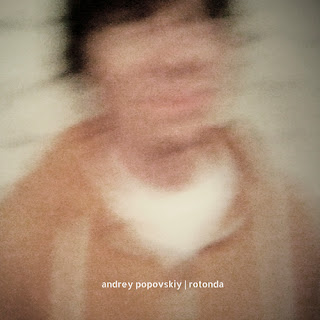 A live performance by Popovsky (lap steel guitar, electronics, objects) in the rotonda [sic] of the Mayakovsky Library, I take it in St. Petersburg, Russia.

The reverberant quality of the rotunda is put to good use throughout this extremely quiet set, both as a subtle spatial presence and as an echoer of the occasional louder (though contained and pure) percussive elements as well as the odd, siren-like sound that emerges about 24 minutes in. Prior to that episode, Popovsky engages in a well-considered, tentative exploration of the space, sometimes eliciting vaguely guitar-ish sounds, more often discreet hums, clicks and hushed sustained tones. The sirens are strange, "out of place" in a sense but welcome in that they act as a break in what had up to that point been a fairly standard, if well done, "lower case" set. They seem to act as something of a release valve as afterwards, Popovsky opens up somewhat, notably in a gently roiling and rattling section toward the performance's end, one of the highlight's of the disc. A good recording, not sure if it's representative of Popovsky's work (I believe it's the first I've heard him) but I'm curious to hear more.