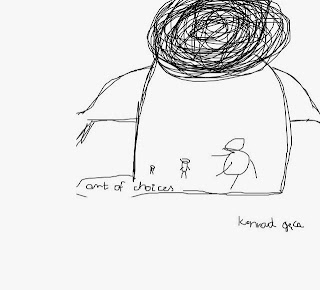 Here's a tidy little quandary for a reviewer. Gęca, a field recordist and sound installation/video artist has, via Mathka, issued an "album" in an edition of 100 copies, each one of which contains entirely different material. So, essentially, he's released 100 recordings in editions of one, under the same title. So what I've heard (and enjoyed) will have only little to do with what you hear, should you decide to do so, the connecting strand being (perhaps) Gęca's sound sensibility. Describing the contents of my copy is rather pointless, but I'll say it ranges from "banal" ambient recordings in urban settings (but all sounding, somehow, pretty interesting) to snatches of music, recorded and live, to bits of indistinct speech, to abstract bangs and rustles, trains, kids, much, much else. It's all very relaxed and straightforward, easily heard as a kind of mini-travelogue even if, in fact, it was assembled randomly.

I liked mine and would encourage other to try their luck. Just don't complain to me. 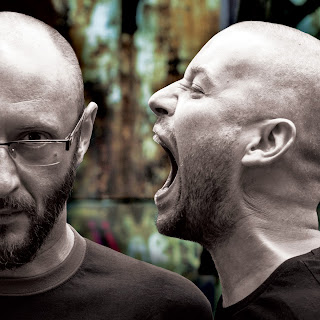 The music here, provided by Denis Kolokol (electronics, voice), Tomek Chołoniewski (drums, percussion, voice) and Alexander Chikmakov (guitars) is much less aggressive than the cover image might lead you to believe. Three tracks, each allowed goodly length to sprawl. "Misinterpretation of misunderstanding" bubble gently along, a faint church organ-like tone heard beneath taps, percolations and soft screeches. ou often hear electronic burbles of the character I associate with early SF films, cheery little blips as from some well-meaning robot. A strong voice emerges, declaiming in...Polish, I think; it sounds worrying, but those little blips are comforting, even if the words are followed by some guttural growls. The voice returns, sounding arrogant--mixing in Spanish, ending with a cry of "Muy fuerte!" whereupon the music shifts to layers of flute-like sounds and percussion. Things get boiling as the drums settle into a steady, almost Blakey-esque rhythm at one point, subsiding into lather, returning. From here, it wanders a bit for my taste, into vocalized bird and animal sounds, but it was a pretty fine trip all told. A rich electronic drone opens "PG/L1", swiftly becoming all swirly and never quite centers again, instead going adrift on a bed of blips similar to those encountered earlier, though more plaintive, and incessant tap-drumming. "GP1" opens up a bit, almost tangential to old Jon Hassell territory, an engaging, quasi-rhythmic meander, odd electric flora sprouting up along the path, emitting pings and throbs, very spacious, pulsing and inviting. A nice conclusion to an inconsistent but not uninteresting recording.