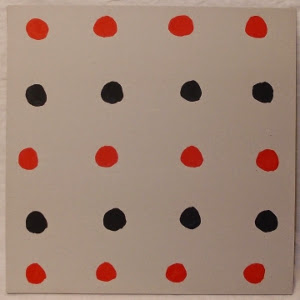 Man, I miss those beautiful covers by Kahn for his sadly defunct Cut label. It was a pleasure seeing this one, hand done in, I think, gouache; just fantastic. [Nope, acrylic...d'oh!]

The cover, made of a kind of cardboard open on three sides so, in a way, a folder, houses two LPs which contain 37 short tracks, all recorded in and around Kyoto in 2012. Kahn writes, "The over-arching theme of the record is the idea of exploring social space through everyday sound-and especially in the case of Kyoto, not just focusing on what we've come to know the city for (temples, shrines, etc.-though some of these are there as well)." It's clearly a very personal collection, which Kahn acknowledges via a reference to Proust's madeleine. Kahn devotes a descriptive paragraph to each track int he accompanying insert.

I won't comment on each of the tracks but at the same time, generalizing does them a disservice as does calling them sonic snapshots" or some such. Each deals with a specific environment or set of environments, each appears to have been constructed from several recordings, sometimes overlapping, sometimes spliced together roughly. There's little pure "naturalism" despite, as near as I can determine, all the sounds being sourced directly from real world activities, natural or man-made. "Memories" isn't a bad, if banal, signifier, in the sense of someone recalling a small sequence of events from, say, a few days prior, certain events/sounds foregrounded in retrospect, including things that may have seemed trivial at the time and, one assumes, "major" occurrences forgotten. Canned music and various electronic manifestations figure prominently, as do voices, conjuring (often) nighttime images of the sort Westerners often have of Japan, the crowds, the sales, the bright displays but also the single events happening amidst the quiet darkness. Kahn manipulates the sounds, sometimes overtly ("Parlor", for instance, or "Kamogawa") but I have the feeling that there's often post-recording construction going on that's more seamless and has escaped me. It's difficult picking stand-outs, senseless perhaps, but the radio scans of "Sender" are pretty fabulous.

My natural tendency is to find the short form in use here to be a bit disorienting; I want to hear these type of things (and the sounds themselves are virtually all quite wonderful) explored at length. So I have to readjust my listening aspect and almost hear these as songs, pop songs maybe. So here's a brief suzumushi (bell cricket) duet, there's a chorus of shoppers. The sporadic appearance of actual pop music (often seized upon and looped by Kahn, as in "Shopping"), something that seems to ooze out of many Kyoto crannies, makes this approach a conducive one. The closing track, featuring coins jangling in a cup in front of an ambient urban hum, is quite moving.

I still find it a tough album to grasp in its entirety, tending to isolate this or that track but individually, all of those cuts are fine and fascinating. I'd certainly recommend giving it a try and especially so for field recording fans and, of course, it's automatic for admirers of Kahn's fine body of work.