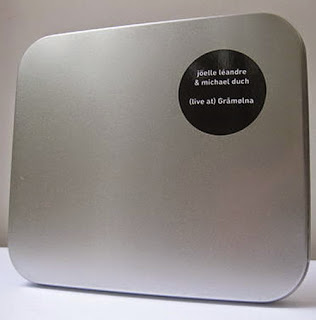 I admit to being a little bit apprehensive when I saw this pairing. My experience with Duch's work has been generally positive, though he seems at home equally well with various schools of thought, including the kind of jazz-based free improv of the efi branch that tries my patience. Léandre, while an extraordinarily strong player, had, in my experience live and on record (in recent years seeing her in Sweden and here in Paris) almost entirely given herself over to that area; watching her in Vasteras a couple of years ago, in a trio with François Houle and Raymond Strid, if I'm remembering correctly, I recall thinking how much I would have loved the music 20 years prior (it was exceptionally well rendered) but could not dredge up interest nowadays. In any case, I'm happy to report that my fears were unfounded or, perhaps, that they were lodged in places I needn't be afraid of in the first place. They succeed in creating some marvelous music not by venturing into post-AMM or Wandelweiser territory but but revisiting, however obliquely, the pleasures of tonal improvisation.

Six pieces in this live set from 2013, four duos and a solo from each. The first begins in the sort of area I expected, rapidly bowed, skittering; very supple and alert. Gradually, though, the sounds deepen, the interplay complexifies and you start to pick up (unintentional?) references to music that owes more to Shostakovich than to Peter Kowald--it's quite exhilarating, a kind or dipping into prior knowledge ameliorated by all that's come between. The next continues in that line, with harsher bowings, sharp breath exhalations, voice and accentuation via plucks, very forceful and dramatic, the bass playing (not the vocals) reminding me a bit of some of Dave Holland's best work in the early 70s. Léandre's solo continues with the vocalizations, evoking vague folk traditions, with simultaneous heavy pluck and harmonic bowing, quite impressive. The following duo might edge closest to the claustrophobic effect I get from much efi, but it' leavened, again, by some wonderfully expansive work in the low registers, sounds that enliven and even give purpose to those flitting by hyperactively above. A delicate, considered solo by Duch (really fine and super melodic in nature), leads to the final track, a robust, bottom-heavy improv with tight rhythmic kernels buoying the load jauntily along.

I'm very glad to have heard this, a really solid effort. 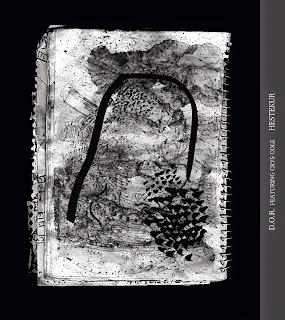 Six tracks, the first four with Jamie Drouin (suitcase modular (!), radio), Lance Austin Olsen (floor guitar, amplified objects) and Mathieu Ruhlmann (turntable, motors, amplified objects), the last two with the addition of Crys Cole (contact mics, objects). Fine, low level rumble 'n' hiss with all sorts of intervening sounds leaking in; the distant, globularly distorted radio voice on the first and third tracks is especially effective. There's a cool sheen to much of the music, a metallic cast that sends out the odd spark or short term series of rhythmic pops; very somber. Without wishing to tread on stale stereotypes, I do think it's clear that as of the fifth track, when Cole enters, things warm up substantially, the music becomes more enveloping, thicker; perhaps a coincidence. The album structure works very well, building to a kind of release at its conclusion. The individual elements aren't earthshaking but they've been molded into a thoughtful, solid form with strong ensemble playing. Well worth a listen. 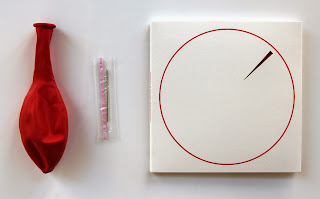 In which 19 musicians (and, by extension, given the materials provided in the always amazing B&N packaging, the listener his/herself) are asked to construct music using only a balloon and/or a needle.

Names familiar to me included Judy Dunaway, Enrico Malatesta, Benedict Drew, Eugene Chadbourne (! shockingly, his track goes on far too long), Jin Sangtae, Ricardo Arias (an experience audio-balloonist), Dave Phillips, Hong Chulki, Luciano Maggiore, Umeda Tetsuya and Frans de Waard. The results are...mixed. Despite the "rules", other sound sources are heard every so often, but even within the parameters, the tracks, while likely as varied as they could be, have an overall patina of sameness about them. Most, to put it in shorthand, carry an efi feel (abundance of activity, little use of space) rather than an eai one. Gen 26's (Matjaz Galicic) dense noisefest stands apart for its non-stop clamor, Drew's work (using cymbals) has some thoughtfulness going as does Arias' "Crackle (Low)" (experience showing, perhaps). Hong Chulki's "No balloon but a needle" is pretty much as fine as his work elsewhere and Tetsuya's piece, "Use paper as a needle put microphone in a balloon" traverses wide, interesting territory including the liquid.

With a couple of exceptions, it's all fine, just not too much I was able to get very excited about. Reduced palettes can be great but sometimes one wants more. Me, I took my balloon, rubbed it between my fingers--nice texture and a lovely soft sound--, blew air into it, let it out, slowly, next to my ear. Quite enjoyable.

Did you know that you can create short links with AdFly and get money from every visit to your shortened links.