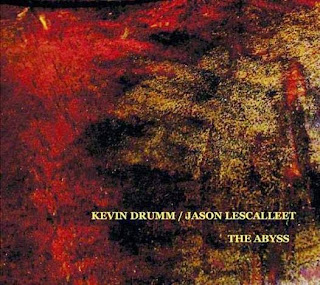 Another double-disc released at the same time as the Frey/Malfatti "II", but, unsurprisingly, a whole nuther bowl o' tapioca although also not exactly what one might have expected from this pairing. The potential for (worthwhile) ear damage was there, no doubt, and while such moments are at least approached, the overall feel of the release is a troubled, brooding dark. Abyssal, one might say.

One learns to expect hidden structures in most anything Lescalleet's involved with and, from the start, I'm curious about the track lengths, all of which bear either repeated or palindromic numbers; of course, I've no idea what this means. The overall structure is a bit odd as well, the first six tracks on Disc One totaling some 38 minutes, leading into the title cut (33:33) which, in turn leads to Disc Two's single track, "The Echo of Your Past" (49:49), the last two being of a pretty different character.

Disc One belies expectations by beginning with a short snatch (:55) of ambient birds before a cauldron of molten lead is poured onto the scene ("Anger Alert", 11:11), hissing and aroar, which is swept into a cymbalic landscape underlaid by deep, deep rumblings. (Pausing to note that, in addition to their usual devices--guitars, electronics, tape--, Drumm is credited with piano and Lescalleet with Hammond 136J, Casio SK5 and Dell XPS). The next surprise is a sudden brass fanfare, lifted from I-don't-know-where followed by an organ descent into a damp morass that includes a slowed vocal that I think I almost recognize, an iterated revisit by the brass that crumbles into ash. It's a pretty great track. We hear the piano bang heavily beneath the surface boil and clatter of "Flaws Played Thawed and Flayed", tympanum-shredding electric shards (very similar to what I recently experienced with a live Drumm set at Instants Chavirés) on "Abuse" leading to wavering organ in "Boatswain's Call"; this entire trio, all palindromic timings, is very fine. "Outside Now" lowers the heat, again with organ-y (sounding ring-modulated) chords which intensify, turn to gravel and coruscate, a slash and burn strategy that leaves the field clear for the title cut. Ya got that? "The Abyss", the cut, is all about low, ultra-low cloudy sound; it caused audible vibrations in various objects on my table. There seem to be numerous elements involved but the two that standout are what sounds like a low, controlled feedback yawp/billow and something approximating a corroded, distant orchestral sample, sometimes with fuzzed guitar swoops entering. But it's all so blurred and dark that things morph into one another and you're left with the impression of sheer, deeply vibrating mass. There's tonal content buried in there as well, occasionally sticking its head out and conjuring up images of the nether reaches of early prog bands. It's an impressive piece, managing to sustain interest throughout its length despite more or less occupying one space, and serves as a fine repository for the tracks that preceded, as though they eroded or were tossed into the churning chasm. Disc One would have been a very strong recording on its own

But no. "The Echo of Your Past" starts akin to "Dawn" on Disc One, a (nighttime?) swath of crickets, fumblings about and passing engines. Lava emerges, scours the scene leaving a low hum. One begins to think that this work will be more episodic than the title piece and, in a way, it is but very subtly. Again, things drift down to the murky depths but now, in addition to the layers of thrums and vibrations, there's a prickly super-high tone flitting around, messing with your cochlea and other gradual shifts as well. The organ surfaces (I think it was there all along), dark, rich and grinding, a great sound, wonderful tension in the sustain. This peaks and abruptly fades just short of 20 minutes in, the "natural" sounds re-emerge for a bit before we once again descend to the abyss' floor, the quiet swirl of noxious gases inevitably building in strength and solidity, back to that subterranean feedback-y quality we heard before (it wouldn't surprise me if much of this track was constructed from those on Disc One). Table shaking again with the subsonics, eventually augmented by (I think) a raft of burning sounds. From those ashes, ethereal ringing--redemption? An explosion back into the night, soft guitar chords, crickets taking things out and sudden silence. A really fantastic piece.

And an excellent release in toto, as strong as most anything I've heard from either in quite some time.