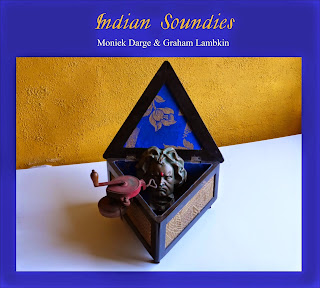 A seductively absorbing release. Essentially the work of Darge, two of the four tracks are hers alone, a third is a collaboration between Darge and Lambkin (using, I think, her material) while on the fourth, she invited Lambkin to create his own work "using materials gathered online), though perhaps some of Darge's recorded sounds find their way in there as well.

Regardless, there's a difference between the first two tracks, "Tamil Nadu" and "Ladakh" and the latter ones. To her credit, Darge (to my ears) manages to steer pretty much clear of mere exoticism even as her sound collection includes what seem to be ritual ceremonies, local insect life, street merchants, etc. We also experience recorded music, possibly blaring from markets, traffic noise, car alarms and such, Darge balancing these elements with both a welcome transparency and a strong sense of immersion, not mere onlooking. On the second track, the elements are sometimes disarmingly simple: lapping water, regularly struck drums, a man chanting--but the effect is rather mesmerizing. As new sounds slowly filter in--a rough-toned, struck bell, a responding chorus--there's a strong sense of build, of thickening atmosphere, all very dramatic (in a good way). Very satisfying work.

The collaboration, "Indian Weather Trap", has a thicker, messier sound right from the start (that car alarm elbowing through the fog), urban sounds in rain but with sharper, right-next-to-the-ear raps and bangs, plus an encompassing throb, as from loud bass notes heard through a wall. There's more of the seemingly casual, hands-on approach we tend to hear in Lambkin's work (for example, what sounds like the pressing of a record button, the fumbling of a mic), all of which serve to further de-exoticize the Indian elements. As enjoyable as the Darge tracks were, this one, especially for listeners less attuned to field recordings and more to electronic experimentation, is a bracing tonic, something more akin to Lambkin's work with Jason Lescalleet, very fine. Lastly, Lambkin's own "Therianthropy" (yes, I had to look it up: the mythological ability of human beings to metamorphose into animals by means of shapeshifting) is an entirely other thing, the predominant early element being a swarm of shenai-like instruments whose intensity recalls things like Master Musicians of Jajouka, the swarm buffeted by obscure ruffles of sound, soon evaporating in a mix of fauna, heavy breaths and automotive exhaust, cutting off sharply. It's as giddily disorienting as anything I've heard from Lambkin in a while, which is to say, it's pretty fantastic.

Did you know you can create short links with AdFly and earn dollars for every click on your shortened urls.