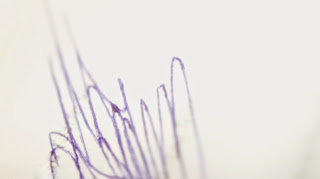 There's elaborate packaging and then there's elaborate packaging. We have here two wooden "drawers" of a sort, each about 6" x 7" x 1/2", fairly heavy, with a sliding compartment. In one is a CD. In the other, covered by an ink-spattered piece of white cloth, are sixteen 3 1/2" x 6" cards, all of which have photos on one side, most of which have ink drawings, originals, on the other. The photos are close-up, slightly blurred shots of ink scrawls (purplish) not unlike some of the texts/drawings on their reverse. The drawings are mostly abstract, ragged and splotchy images, with the odd cartoonish face or figure. One of the cards contains a hand-written note explaining the whys and wherefores of the recording. Essentially, Chavarria took a microphone and walked around his hometown (he lives in São Paulo but it sounds like the home town in question is a much smaller place), taping as he went; we hear some 77 minutes of the journey.

And it works. There's absolutely nothing "special" about what we hear, very much the every day and a fairly quiet day at that but I think that's the major part of its charm. You hear traffic every so often, a yipping dog, the wind buffeting the mic but it's all very low key, quiet, as though he's walking around the perimeter of a farming village, not seeking out streams, intense activity of any sort, just observing the calm goings on. I get a strong visual sense of a sunny day, crop fields, a house once in a while, cars a quarter mile off (I could be entirely wrong!). It's a question I often return to: why this field recording (here, as far as I can tell, entirely unprocessed) works and that one doesn't. One of the criteria seems to consistently be a sense of unforcedness on the part of the recorder which is certainly in evidence here. And, despite the fact that Brazil, to me, would be rather exotic, there's no feeling at all of exotica here, simply of life, astutely observed. That's more than enough.

A very fine release all around, sounds and objects--try to get ahold of one. 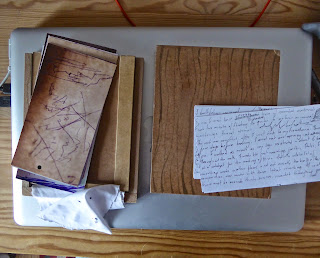 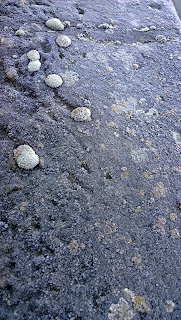 Two strong, rigorous tracks from Yan Jun, each pared down to a form like a live electric wire. "1" is, on the one hand, one sound, a bristling electric buzz, kind of what you might imagine a socket shock would sound like if extended for a half hour. But within that, there are layers upon layers, and that's before you the listener begin to move your head, further complicating matters. Attempting to tease out these elements, I get lost after four or five, not even sure if I'm actually hearing them or not (as though there's a difference). The main body of the piece modulates as well, the pitch shifting ever so slightly now and then, more drastically other times, the though rarely interrupting the essential flow of current. Over its course, the bristles melt into molten solder, both ear-melting and endlessly fascinating for those head movements. "2" resides in similar territory, though thinner and a shade more uncomfortable, slicing into your aural membranes more easily. Again, multiple levels can be heard at close listen; I highly recommend playing it at volume with one's ears between the speakers, moving.

A couple of works more easily grasped via experience than description, as they teeter on that odd boundary of the simple and the complex, depending on degree of concentration. Well worth it for fans of insinuating, subtly disturbing noise.