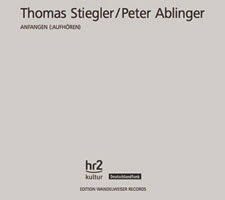 A split disc with five compositions by Stiegler and two by Ablinger, each performed by some combination of violin (Sabine Akiko Ahrendt), cello (Jan-Filip Tupa) and clarinet (Diego Montes).

I think I'd only heard Stiegler's work before in conjunction with Hannes Seidl on their early Wandelweiser release, "das wetter in offenbach". Here, he evinces a rather playful approach, especially in the two "Treibut" (flotsam) pieces, 1/2 (2011) and II (2009); playful but with a nicely bitter edge. Both of them nod to a kind of minimalism. In the first a steady, slowish pulse from low, bowed cello and high, piercing clarinet serve as place marks around which a scampering, five-note violin sequence flits. The trio melts into a vague pool that only very gradually regains structure, congealing into different regular form; very enticing. The second flotsam begins with an almost march-like cadence, interrupted by brief, flowery puffs. It morphs into a delightful kind of round, slowly lengthening the notes, becoming dreamlike, soon ambulating through numerous permutations, many of them involving rhythmic variations played off more languid passages; very charming and wryly humorous in its acknowledgement of past forms. In the middle of the disc, two very short, pieces ("Gelbe Birne III", nos. 1 & 2), dramatic, forlorn snippets, bracket a gnarly nugget for solo clarinet, "eins, zwei, drei" (1992/93).

Ablinger's "Amtsee bei Regen" (2008) strives for a kind of simplicity, "writing a note on the staff paper while listening to nature (to the rain)", and listened to in that manner, it seems to achieve this in a set of 24 sequences, some of them involving simple scales, overlapped and at different tempi. You get a general sense of overlays, say three transparent sheets on each of which only a handful of indications have been printed--very charming and oddly restful. "ANFANGEN (:AUFHÖREN)" [BEGIN (:CEASE] (1991), for violin in viola tuning, is something else again. The 23+ minute piece is based on the initial note, a fiercely bowed one that sounds somewhere between an aggressive car horn blast and one of those yelling goats that commonly circulated around the net last year. It's harsh and disturbing and it repeats, relentlessly at first, modulating in degrees of skronkiness and (slightly) pace, gradually allowing in softer asides and space, much of it more or less consisting of the same note (sometimes I found myself thinking of it as an astringent, solo violin version of Rhys Chatham's "Guitar Trio"). The initial assault resurfaces periodically, the pitch shifted slightly, braying its existence into a space where quieter scrabblings also attempt to live. It's a bracing, challenging work, fiercely performed by Ahrendt.

The set as a whole is balanced between the overtly and subtly challenging; even int he apparent lulls, there's much to learn, much that's more difficult and rewarding than might be initially perceived. A good, tough set of music.