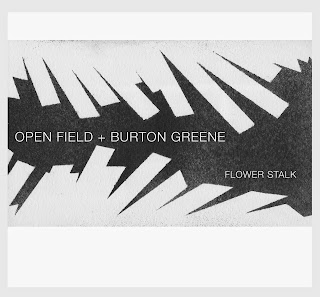 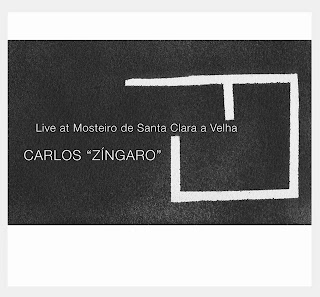 A couple of items a bit outside my normal range arrived recently. Not just that they involve a jazz-based sense of free improvisation but also that, as it happens, I'm not overly familiar with the prior work of either Greene or "Zíngaro" (only just discovered that the latter's surname is Alves, hence the quotation marks, which aren't always used).

I've heard bits and pieces of Greene's work over the years, but most often as a sideman--I recall some work with Perry Robinson and may even have seen him play in some context, perhaps at Environ. What automatically pops up in my head when I hear his name, though, is the infamous concert recounted (in disputed form) by Leroi Jones (Amiri Baraka) in "Black Music"; Greene gives his side of that event, and much more, in this fine interview by Dan Warburton in Paris Transatlantic form 2003.

In any case, we have here a performance by Greene (piano, prepared piano, percussion) in the company of Open Field, a Portuguese trio consisting of José Miguel Pereira (bass), Marcel dos Reis (nylon string guitar, prepared guitar, voice) and João Carnões (viola, mey--a double reed, similar to a shawm--, percussion). (In passing, I'm curious about Greene's mention of the Free Form Improvisation Ensemble, a group he, Alan Silva and others founded in 1962 and which he describes as "the first group to play totally improvised music from our intuition". I've never heard this ensemble and can't locate any samples on-line. Cadence released a recording from 1964 which Derek Taylor reviewed for All About Jazz in 2000. From his review, and my own intuition, I expect that the music was pretty jazz-influenced, i.e., not in the same vein as AMM or Group Ongaku). In a way, the album encapsulates what I find to be some of the highs and lows of jazz-based free improv over the past few decades. In fact, the opener, "Rising Intensity (for Alan Silva)" is a bit of a microcosm in itself. True to its title, the intensity does indeed rise over its duration, though until it reaches that peak, the textures and interplay are standard fare, excessively busy and gestural (for my taste), sometimes overly virtuosic. But perhaps all that is to a point, the moment where things suddenly gel and the real energy kicks in, led by Carnões' viola, on which instrument he has something of an engaging Leroy Jenkins tonality. In fact, at its best, through squinting ears, I might convince myself I'm listening to a Creative Construction Company track. Granted that great pair of live LPs date from 1971, but still. Things tone down very nicely on the second piece, "Angels on the Roof", which finds the quartet in a much more considered frame of mind, led in by a lovely bass/guitar sequence and carrying through with some fine, pensive piano offsetting bowed metal, very tasty. Greene's solo offering is also quite fine, the pianist evincing substantial lyricism and richness of touch, with a hint of Chinese scales; would love to hear more in this vein. The remaining two tracks, while not bad, follow much more along the routine efi playbook, sacrificing the thoughtful placement of sound for scurrying hyperactivity and, in the last piece (titled, um, "Ancient Shit"), an odd lurch toward some idea of, I guess, ancestral rhythms. For fans of the genre, these and the remainder of the album will be more than enough and to those listeners, it's highly recommended. For myself, it was more half and half but the heights are very enjoyable and I'm glad to have heard it.

I'm less sanguine about "Zíngaro"'s live solo violin effort. Again, I've encountered his music now and then over the years, generally in group contexts, and have never been particularly drawn to it. I think part of the reason is my perception that he straddles the divide between a traditional, even Romantic approach and a modernist one and I find myself saying, "One or the other". "Zíngaro", of course, may choose to ignore the distinction and, as with the Greene project, I can easily imagine aficionados of the violinist to find this release rapturous in the extreme."Crushing Wheels" finds him in an iterative, if not quite minimalist mode, reworking a rapid phrase, streaming out frills and digressions, all very impressively virtuosic but, for me, too much so. "Portions of Life" is a little more considered--you can easily hear the echoing sonics in the structure--but "dramatic" in a kind of forced way. Here, as elsewhere, the playing is unquestionably first rate; my issue is with the resultant music which strikes me as more sparkle than heft. Again, I'm not expecting an Angharad Davies approach here--this is the way he's created and played for many years and he does it with panache. It's simply not my cuppa. I would have liked to have heard "Zíngaro", just once, go full bore into lush Romanticism, the way I've heard Malcolm Goldstein do a time or two. He comes close on the brief "Void of Night" and portions of the concluding "Scroll of Fate", my two favorite pieces here. 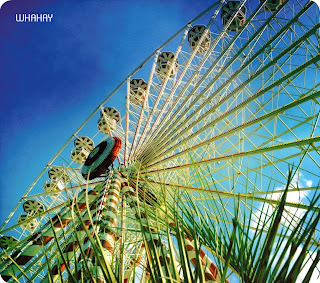 Thought I'd place this here, as it's also a jazz-based release. Whahay is Paul Rogers, he of 7-string double bass fame, Robin Fincker on tenor saxophone and clarinet and Fabien Duscombs on drums, the trio applying, to some extent, an efi approach to nine pieces by Mingus. The works chosen are fairly standard, all save one from the late 50s-early 60s portion of Mingus' career (for the record: "Better Git It In Your Soul", "Ecclusiastics", "Jump Monk", "Canon, "Pithecanthropus Erectus", "Reincarnation of a Lovebird", "Bird Call" [sic], "Work Song" and "Goodbye Pork Pie Hat". Sometimes it's simply a matter of playing the heads, improvising on the theme (whether freer than some of Mingus' musicians is arguable) and returning for a recapitulation. Other times, the themes are approached obliquely and semi-buried amidst the trio or attractively fluttered toward ("Reincarnation"). Rogers, of course, is an astonishing bassist and he pulls off some technically wondrous things here: the central melody of "Ecclusiastics" and subsequent pairing with the clarinet, his guitar-like intro to "Goodby Pork Pie Hat", among many others. The trio plays very tightly when called for, rolling off riffs like "Jump Monk" with ease, loose enough otherwise. Both Fincker and Duscombs appear quite supple and capable. They do what they do very well, very solidly and with a decent amount of imagination. Personally, I don't quite get the necessity of the enterprise, don't think anything substantial has been added to Mingus' legacy but others may well differ. Listeners who found bands like Mingus Dynasty too staid and are enamored of, for example, Mats Gustafsson's The Thing will find much to enjoy here.