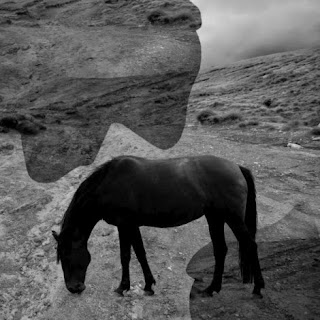 OK, this is a tough one for me. Let's start with the structure: 50 one-minute tracks (or close enough, 60 or 61 seconds). From the beginning, I'm looking for reasons. By nature, I'm not so fond of this "type" of agglomeration, from Otomo's "The Night Before The Death Of The Sampling Virus" to Rowe/Lehn/Schmickler's "Rabbit Run" and many more, I tend to find this approach wanting, difficult to disconnect with a feeling of a catalogue. I can imagine it working, can imagine a subject, if you will, that requires this sort of arrangement, though I can't say I can think of an example that strikes me as successful off the top of my head. I can understand a kind of perverse idea of cutting off the listeners pleasure (or, at least, interest) just as it's really gelling though, again, I'd need some other justification than impish glee. That said, Eubanks is using "open circuit feedback" here and the sounds themselves...well, they vary, of course, but by and large there's a thinness to them that only occasionally draws me in, even for that minute (exceptions are there, to be sure). There's often a rhythmic component, I'm guessing in the nature of the electronics cycling through phases on it's own, not initiated by Eubanks. This, oddly, renders them a bit less engaging for me than if they were in more ragged form. In most cases, I experience the initial sounds and, almost automatically, wait to hear them decay, be joined by others, expand--any enhancement at all. But, as a rule, this doesn't happen, they're simply presented, allowed to live for a minute, cut off. I think momentarily of Richter's color block paintings, something else I have some degree of trouble with. As with those works, I try to "stand back", apprehend the relationship (or lack of same) between the samples but, for me, it's more difficult with audio images than visual ones. I still find it more opaque than anything else, though it's likely I'm missing something. Steve Flato has written a nice appreciation, posted on the Nueni site, which readers here should check out. I'll try to return to this over time but for now, I'm pretty much stymied. 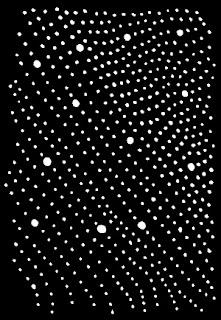 Speaking of difficult...a cassette release from Kahn (reviewed here via CDr), two concerts, or excerpts therefrom, in Brighton and Ghent, in 2012, Kahn in his electronic mode (analog synth, mixing board, short wave radio). In this case, the sound fields are extended and there are several sources involved at any one moment, so you'd think the reservations I had on the Eubanks would assuaged, at least as far as those elements went. But, damn, Kahn carves a seriously rough trail here, very forbidding and relentless. The sounds, though "thicker", for the most part, than those described above, are almost all cold and harsh--no mechanical rhythms but the chittering of sparking machines, sub-areas of deeply muffled voices (I think--there are implied cadences in effect at various points but they're well beyond the range of comprehensibility), grating metal-on-metal friction. Hard to avoid the image of being in a large, dark space with devices sputtering sporadically, casting sharp, orange glows. Still, the length, the opportunity to find some kind of foothold in the debris, makes this music more graspable and appreciable, at least to these ears. Patterns can be detected (either actually there or made up in my head), relationships established, etc. For all the difficulty of the sonic material--and this is tough sledding, no doubt--there's more breadth to it, more room for the listener to participate, not merely to check off the next item on the list. No question, sitting through these sets, live, would have been intense to the point of discomfort, but that's fine, good to be jostled, even bruised. Good stuff, not for the squeamish.