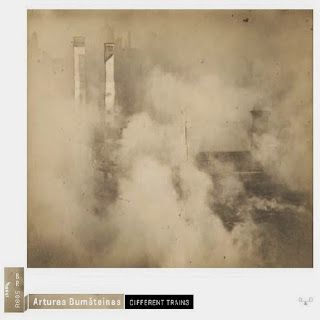 Despite the fact that the first of three compositions presented here incorporates railways and that all of them are awash in historical references that, implicitly or explicitly, reference oppressed people in northeastern Europe, including Jews, one wonders at the choice of album title, if it's a kind of provocation. Curious about that.

"Wielka Improwizacja" is a "radiophonic composition" using texts by Adam Mickiewicz' "Dziady" which deals with the horrors of 18th century Poland. Bumšteinas combines an archival recording by Miron Białoszewski, contemporary readings (in English and Polish, adult and child's), the Chordos String Quartet, some lovely guitar and voice by Krzysztof Marciniak and his own contributions on church organ, field recordings, shortwave and more into a very moving collage, the elements feeling slightly dreamy (but often bitter), almost liquid as they move between each other. Train sounds filter through periodically, imparting (given the album title's hovering presence) a sense of 20th century horrors mixing in with older ones. It's clm and even romantic (the guitar song that appears near the end) but always with a sense of strain and composure under pressure. A beautiful piece, unusual in form, subtly striking.

Bumšteinas collects multiple recordings made on church organs and melds them with percussive sounds (bells, stones, etc.) sine waves and voices on "Acceptnik", again achieving a kind of dreaminess, here more brooding and mildly hallucinatory than earlier. It drifts a bit, very subtly, wafts in and out; as with the prior piece, oddly moving. "Pinavija", the final work, uses as a prime source a 1936 78rpm recording of the Hebrew prayer, Jehi Rozon, recorded by Israel Bakon in Berlin (though only using the harmonium sounds therein), the time and circumstance automatically lending an air of sorrow. Bumšteinas carefully adds violin, synthesizer, voice, clapping, flute, koto and dulcimer, none of them obtruding, all providing a soft bed. My favorite piece from this fine set, again received as quite emotional, the historical context being tremendously served by the music which never becomes remotely overbearing or sentimental, rather achieves a somber stasis, contemplative and containing both immense sadness and firm resolve.

A beautiful release, please don't sleep on it. 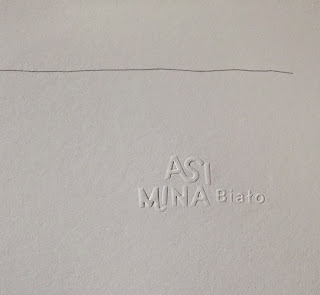 It's a little hard for me to understand in any depth what's transpiring here given the language (Polish). There are twelve songs, each containing vocals by Mina, using texts from Miron Białoszewski (who was also referenced in the Bumšteinas recording above). The songs are tuneful and rhythmic, presumably with nods to local folk traditions (although sometimes I pick up tinges of Japanese groups like Hoahio), almost always accompanied by round, fairly perky synthesized sounds. They're attractive enough in a "simple", even sing-songy way and were I able to comprehend the lyrics, I'd doubtless derive more than I'm able to discern in the connection between words and music. I think I detect a degree of sardonicism between what I'm guessing to be bitterness and the almost music-boxy sort of tunes heard here, but I've no way to be sure. The music is pleasant enough but hardly gripping but then, I'm guessing it wasn't meant to be as she writes (per Google translate) that the texts are "a very simple story". 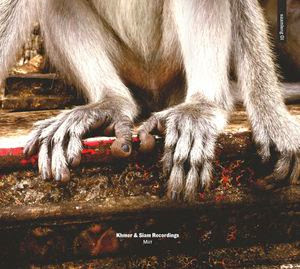 What little I've heard before from Mirt (whose name in its entirety is Tomek Mirt) has been of the electronic, quasi-ambient variety, very nice, but here we're presented with pure field recordings, as the title indicates from Cambodia and Thailand. Though ten tracks are listed on the back of the package, only one is present on the disc itself, but the titles provide a roadmap of sorts through the sounds, beginning with rain and working through cicadas (lots of them), human bands (traditional), more insects, radio (pop), a "hobo song" and concluding with "riots and the muezzin" (the latter raw and beautiful, well back in the mix in an urban ambience; if there are riots going on, they're pretty quiet ones). On the whole, there's a travelog feel, something that puts me off a bit with this kind of recording--too much exotica (to Westerners). But it's sharply recorded, flows very well and will provide connoisseurs of this genre with much pleasure.