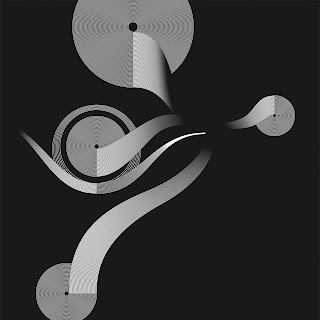 Tilly's work often confounds me. Sometimes it's ultra bare bones, recordings of water insects, for example. Others, like much of this, it involves massively dense constructions made from, apparently, numerous recordings and who knows how much processing. I have to kind of consciously not think of the "hows" of its structure and more simply experience the sounds as though I've somehow been dropped into a space where such noises occur as heard.

This is a double LP (with a CD containing source material). The recordings were made in French Guinea in 2013, Tilly describing his method as "approaching the forest as if it were a city", aware of the subjective connection the modern mind makes between faunal sounds and electronics, appropriating the former as such and weaving a construction much as he might do with synth patches. Side A moves from a roaring mass produced by overlapping several days worth of recording from the same site--very impressive and immersive--to a quiet, actively clicking soundscape, feeling very much like nighttime, a lovely counterweight to the first track. Side B continues in this quiet vein, again with a late evening feel. Pieces like these, while perfectly listenable, I find hard to concentrate on as anything other than "simple" recordings, albeit with the odd noticeable enhancement or crescendo for a given sound within the mix. I can imagine being int he environment, sitting, and hearing the same thing, or my mental variations on that sameness, which isn't meant as a criticism, just an observation, but something that arises while listening which, somehow, seems out of place. The second piece on this side moves from that initial simplicity to an increasingly complex matrix--the lines and circles of the cover image come to mind. Side C continues in this general vein, open and quiet, especially the second piece, one of those that involved substantial construction. The final side's opening "La grotte, parfum" is especially lovely, two tracks form the same location, with incredible fluttery chirps against a misty background that, though fainter, is wealthy with all manner of details--my favorite piece here, really remarkable. We hear, briefly, a turtle breathing, admittedly surprised at the audibility of this phenomenon, then a bizarre insect colony, whose noises occur in irregular patterns, very harsh and buzzing, cut off with surprising sharpness on each iteration.

The disc offers an hour of unprocessed source recordings. It's very steady-state in a way, the same sets of sounds cycling throughout, notably a loudly (and beautifully) whistling bird over a rumbling substrate with middle ground hoots, whistles, chirrups, etc. between. Very comforting and lulling, I find, really nice.

Overall, I think this is my favorite offering from Tilly thus far and a fine example of what's possible in this field.

You can listen for yourself at Aposiopese 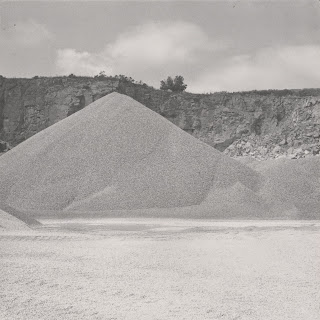 The interior sleeve depicts eighteen objects, all but two (a pot with cover and a wooden wedge impaled by two hook screws) attached by wired to batteries. The objecs are more or less of the household variety though several are a little strange including six standard whistles apparently affixed together in an alternating right/left pattern and two items that look like the heels of shoes, atop of which we see one or two spikes and a single die, one red, one green. One apprehends a toylike scenario. David Toop's notes make reference to a pachinko parlor and there's something of that bright, thin, semi-chaotic ringing aspect to the music, starting right in with the first track. But it's not all fun and games.

The first work on Side A is pretty playful indeed, small metal balls rotating in circular frames, jangly tapping elements added, more balls, tin hiccups and more, all gayly tumbling along giving something of a march of the toy effect, or some elaborate, lacy clockwork contraption. Track two grows more anxious, a slow, grinding rhythm underneath the higher clatter lending an air of insistency and even inexorability to the activity above. Flipping the vinyl, the third cut feels almost desolate, the sounds no longer strutting or scampering, now searching for places to hide. The atmosphere becomes dark and sooty, any laughing tingle from the devices having been replaced by dry whirs and hums like distant chainsaws. Strong stuff from such slight instruments. Then comes the clean-up, like a desultory Roomba scouring the abandoned floors for detritus, signs of life beginning to rise from the dust toward the end.

Hah, I'm sure I'm reading much more narrative into the album than intended but, I think, it's difficult not to. Also hard not to thoroughly enjoy the ride and wish to have attended a performance. Solid, fascinating work, well worthwhile and, as it happens, a very nice bookend to the Tilly above.

i always wonder why i enjoy some reviews of field recording-based music, while others do nothing for me. they all sound perfectly nice indeed if a bit samey. which i guess comes with the restrictions of the recorded field. maybe this one was patched together just a little more roughly, anyway, i now bought the Tilly and am enjoying it hugely.