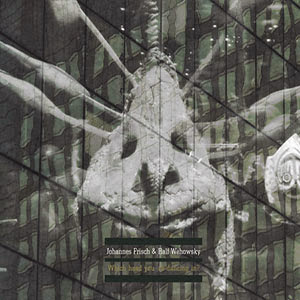 a fractured homage to Ornette Coleman with Frisch, who I don't recall having previously heard, on double bass and Wehowsky doing his sound transformation thing. It leaps right in with "stutter train stoppage", with warped beats and noise sounding like a garbled version of one of the Prime Time bands but then, happily for this listener, darkens and tones matters down with "theme for a skyscraper", wherein one hears mournful bass bowings (Izenzon is certainly recalled) and wonderfully mysterious, muffled thuds and knocks, an excellent piece. Beats, fragmented or otherwise, appear throughout most of the tracks, often underlaid by more sombre bass, but are generally presented with enough rough edges and grit to be sonically palatable even as one understands their presumed tongue-in-cheekedness. Still, despite being a fairly rich stew, over the course of the disc that approach loses much of its luster for me, is over-satiating. More music on the order of "theme for a skyscraper" would have been most welcome. As is, Wehowsky completists will want it; I'm not entirely conversant with his catalog, but I'm guessing this stands out a fair amount. "Tulpas", it ain't.

Transmit is a group under Tony Buck's aegis with Magda Mayas on organ and piano, James Welburn on bass and Brendan Dougherty on drums, essentially a largely instrumental rock band with imagination,, bearing a sound that reminds me of classic Golden Palominos circa their first eponymous release and "Visions of Excess", a similar combination of driving rock, funk underpinnings and an acknowledgement of the avant garde. The opening track, "Vinyl" pounds relentlessly and vibrantly (I almost expected to hear Arto's strangulated vocals emerge), incorporating some really cool downward pitch shifts along the way--great track. When vocals do enter, on the third track, it's a bit of a letdown, too soft and prog-reminiscent; I needed more roughness. Vocals aside, the music is great fun, especially the fine, barely reined in keyboard work from Mayas: propulsive, giddy, lurching and flowing. I liked it much more than I expected, would enjoy catching them live. 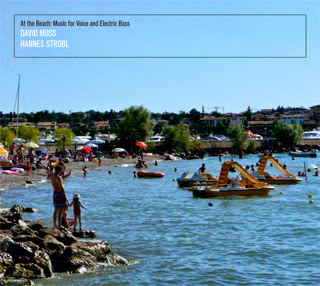 David Moss/Hannes Strobl - At the Beach: Music for Voice and Electric Bass (Monotype)

I think I first heard Moss in some Zornian context in the late 70s in New York (maybe with Frank Lowe too?) and recall owning and being a bit excited about a couple of his Dense Band records on Moers in the mid-80s. But his vocal shenanigans soon became tiring and by the time I saw he was performing in a revitalization of Bley's "Escalator Over the Hill" (late 90s?), I shuddered a bit. My only experience with Strobl is minimal, I think confined to Boris Hegenbart's "Instrumentarium". The opening track, happily, finds Moss in a calmer role, "reciting" the text in a serene, nicely modulated voice (the quality of his vocal chords has never been in question) over dreamily percolating electronics; not amazing but warm and tasty. Unsurprisingly, the activity level is ratcheted up here and there, allowing Moss to indulge his more manic side, sounds that are remarkably similar to those eructed in 1985. Strobl's bass and effects smoothly glisten and tumble, recalling aspects of Eno's 70s pop atmosphere, both when surging and while creating oneiric soundscapes. The lyrics are inoffensive, ranging from beat/slack to absurdist, to zen/repetitive, reminding me of Ashley more than anything else. In sum, while not the kind of music I get real excited about, it's much more interesting and enjoyable than I expected and not nearly as aggravating as I'd feared.