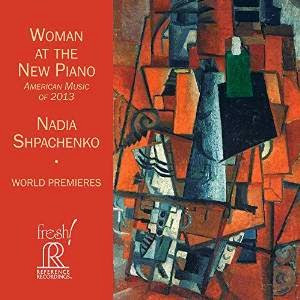 There are plenty of areas of music about which I'm a bit uncomfortable writing, where I don't think my footing is too sure. Certain branches of contemporary composition, for example, those that grew less out of Cage, say, than the New Romanticism of Del Tredici, Corigliano and akin composers. My knowledge of that territory is extremely limited (enough so that I'm not even sure whether they're appropriate composers to cite in this instance!). Looking over pianist Shpachenko's performing history, I see composers whose oeuvres I know reasonably well (Xenakis, Crumb), those whose work I only know marginally (Carter, Kirchner) and any number who are entirely unknown to me, including the four represented on this disc. So, bearing that in mind...

Shpachenko commissioned all of the compositions included here. I should say at the beginning that, from what is hear here, she impresses very much as a pianist with a light, crisp touch and a way of keeping the music flowing very cleanly. I'd be curious to hear her have at it with some thornier, potentially opaque works like those of Xenakis. Tom Flaherty is represented by two pieces. The first, "Airdancing" is for two pianos and electronics and Shpachenko is joined here (and on one other work) by Genevieve Feiwen Lee on toy piano and electronics. It's a rapidly scampering piece with innumerable cross-rhythms, influenced, probably via Cage and Harrison, by southeast Asian traditions but also with fine (and, I think, necessary) darker sections that impart an air of doubt into the proceedings. It only lasts some eight and a half minutes, but goes through numerous changes, giving a cumulative dramatic effect that seems more symphonic than dual-pianistic. Beautiful playing from each musician. His "Part Suite-a" is rather different, in three parts, much more sonata-like, with a bright passacaglia, a lovely slow movement and a concluding scherzo, all too cutely titled "Scherzoid". For me, the writing here is pleasant enough (and certainly competent) but not so singular, reminding me of any number of other composers throughout. Only in the latter half of the second section ("Lullabande", so I guess the sarabande portion) does the technique combine satisfyingly with the emotive flow, at which point it becomes greater than the sum of its parts. There are portions where both the music and Shpachenko's playing remind me, oddly enough, of Carla Bley's "3/4".

Peter Yates contributes "Finger Songs", a set of five short pieces. Researching Yates a bit, I found at least a small connection to Harry Partch, though I couldn't have told from these works. In a way, similar to the second Flaherty offering, I hear ably written but not distinctive music, with nods to American vernaculars (blues, Tin Pan Alley, rags) here and there, all easily digested but not much that really sticks. Rzewski without the bitterness, Bolcom without the grace. "Cretic Variations", from James Matheson, explores the "cretic foot", simple long-short-long pattern in a 14-minute excursion. Rhythmic interests aside (and those are in plain evidence, chugging along quite nicely), this piece has far more resonance for me. Despite allusions to other forms, there's something much more expansive about it, less hermetic than, say, the Yates, though he comes close to overdoing it about ten minutes in, with a rather overbearing flourish, though all is forgiven over the composition's final, somber and very lovely few minutes. If I hear some Barber, it's in a way that expands on his music, and does so interestingly, doesn't merely nod to it.

But of all the composers presented here, it's Adam Schoenberg who wins me over the most often. His "Picture Etudes" consists of four songs for solo piano (augmented by bass drum and gong). Taking his cue from Mussorgsky, each is based on a painting. The first two are short, under two minutes (a Pierrot work by Albert Bloch and Miro's 'Women at Sunrise'), the first sprightly and (even if thinking instead of Watteau), gayly rococo, quick lines scurrying around solid pillars, the other disarmingly goofy, the drum punctuating several lines of pointillistic dance from the keys. But it's "Olive Orchard' (for the Van Gogh painting) that wows, just a heartbreakingly gorgeous melody, steeped in Americana. Yes, one might draw references to Holcomb, even Jarrett, but this usic carves out its own space, direct and moving; again, played with extreme sensitivity by Shpachenko. "Kandinsky" loops back to the spirit of the Bloch, the rococo now fragmented but losing none of its vitality, trills parrying with bangs, much fun. Schoenberg's "Bounce", which concludes the disc, is for two pianos (again, Lee joins in) and is a delightful romp. Again, Barber seems to glimmer int here somewhere but with more hesitancy and doubt, which is a great "spice" to offset Barber's occasional dips into sentimentality. The writing for the two keyboards is clever enough to bring smiles now and then and the execution sounds flawless. The piece does indeed bounce--cavorts even--through smooth and rough terrain, several nascent songs emerging along the way. Oh, I might've liked a bit more reflection, but the music is so infectious, it's difficult to quibble.

A very engaging set, slightly uneven for me but probably far less for many. Glad I was able to hear these musicians and composers.