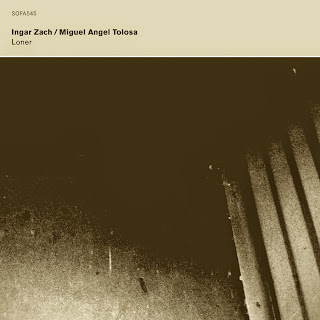 I've been listening to Zach's works for quite a while now and have heard Tolosa's (usually under his alter ego guise as Ubeboet) a fair amount as well; they do seem to be natural enough partners. "Loner" takes material from the past ten years, the pair constructing a disc of resonant, quasi-dronish music that roughly fits in with what one might expect, which is very good on the one hand but leaves me with some nagging questions on the other.

Zach works primarily with percussion (here, as elsewhere, also electronics and field recordings) and his work tends toward the...round, for lack of a better word, generally full of deep and resounding elements, often sustained. This tends to result in music that's extremely attractive, even ingratiating, working its way into one's pores and bathing the listener in richness. At the same time, part of me always yearns for some roughness, some breaks in the flow, more irregularity and surprise. It's tough balance. I sometimes think of the early century work of Günter Müller and associates that arrived at something of a similar place--very good but maybe a bit too comfortable and complacent. I don't think Zach is there yet--his work has more to it (including live; I finally managed to catch his music in performance this past fall)and perhaps that's simply him. Still, I have an itch for some disruption. Tolosa (electronics, field recordings, electric guitar) fits in seamlessly here.

So we have four tracks where the dominant sensibility is a dense field wherein one can detect muffled site recordings filtered through cymbals (richly bowed or played with soft mallets), deep percussion and electronics, a kind of foggy, moist soundscape, mysterious and brooding but with few sharp edges. A guitar tone may whine fleetingly through the dark, a bell may briefly jingle, but the pervasive feeling is shadows and thick mist. Which is all fine and all four pieces operate really well. The second, "Whirlworlds", works itself up into something of a frenzy, some welcome grime getting into the gears--I'd love to hear that approach extended further. The final track, "Astonaged" also verges on more difficult territory, generating a churning quality that calls to mind an old, riverside factory, gears and chains dredging slag from beneath the water, very strong.

A good disc, no real complaints, only a sense that this pair could maybe take a few more risks. As is, though, it's plenty rich enough to satisfy any aficionados of their work. 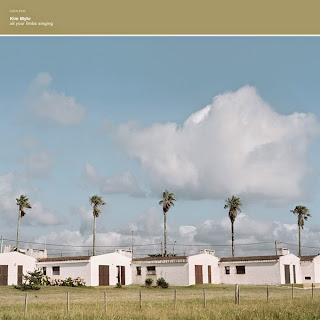 Most of my previous encounters with Myhr's work have given the impression of a warm, very musical personality and this release delivers that in spades. Solo 12-string acoustic guitar, six pieces, all of them engaging and, well, pretty even. Two of the tracks, "Weaving into Choir" and "Sleep nothing, eat nothing" consist of rapidly strummed chords, very steady-state in one way, though shifting within all the time; reminds me a bit of those classic Laraaji zither sides, very tasty indeed. "Descent", "Blinky" and "Leaping into Periphery" are more ruminative, each taking a discreet note pattern, calm, graceful and echoing, and repeating it again and again, digging into it and, just barely, elaborating on it. It's an interesting approach, a kind of dissection of a line; it sometimes took me a while to realize the self-referential aspect of the music, it flows so naturally. All three are very attractive, very thoughtful. But my favorite might be the closer, "Harbor Me". A "simple", clean four-note phrase that absolutely sounds like its presaging a song--I really expected to hear a voice, baritone, enter the track--instead allowing slowly strummed chords to emerge, bloom-like and ghostly. It lolls there, contemplative and content--beautiful piece.

And an extremely attractive offering: open, considered and refreshingly heedless of trends. Don't let it slip by.

Did you know you can shorten your urls with AdFly and get cash from every click on your short links.