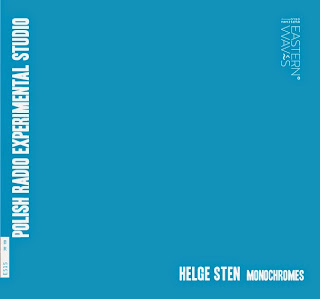 Information on this release is hard to come by (not much on the sleeve or online) but I'm assuming this is the same Helge Sten who was/is a member of Supersilent. Addiotionally, though Sten's name is all that appears on the exterior, the last track seems to be entirely by Sikorski, whose music is also apparently the sampled source of the fifth and title track, the previous four ("Quad 1" to "Quad 4") deriving from samples of the composer Bohdan Mazurek, whose work has previously been issued by Bôłt.

Confusion potential aside...the Quad series consists of four fairly short (total time about 14 minutes) nuggets of electronic washes with a metallic sheen bearing embedded nuggets of brief pulsations, chilly and calm for the most part, only the last containing substantial movement and agitation (and stereo panning) as those washes acquire more the aspect of an angry wasp swarm (thought I heard a tiny snippet of the Ramayana Monkey Chant emerging now and then). "Monochrome" lives up to its title and does so well, spending its 16+ minutes inhabiting a limited, icy place with just enough closely observed variation, again with hollow-sounding electronics, to sustain interest and then some. Even as it covers quasi-similar territory, the Sikorski piece, "Solitude of Sounds", is my favorite here: cold, whistling winds funneling through brittle but resonant space. Stasis music, definitely, solidly formed and resolutely staying in one place, observing the surrounding activity, focussing the listener's attention on a thin sliver, finding a great deal therein. A tried and true strategy, very well carried out here. 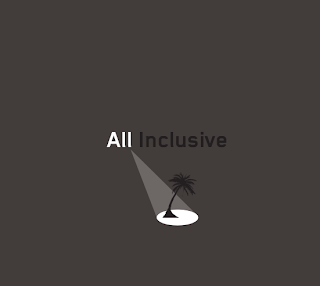 National anthems from "countries that are not doing very well" (here, Greece/Cyprus, Nepal, Haiti, Afghanistan, Vanuatu and Guyana) performed by Saenz Valiente on vocals and percussion and Masecki on piano and keyboards. Despite the album title, no over Stockhausen references that I could pick up. The first thing that came to mind on the opening track, "Ὕμνος εἰς τὴν Ἐλευθερίαν" was those wonderful Angelo Badalamenti/Julee Cruise collaborations, a similar sense of fractured dreaminess, a simple song crumbling apart. The Nepalese anthem, "सयौं थुँगा फूलका" (yes, I just enjoy seeing those typescripts here), is subjected to an asian-pop kind of treatment which again, fractures kind of Steve Beresford-ish manner; it's tough sledding, probably intentionally so, the synthy beats becoming seriously overbearing. Less goofy and more dour, Haiti's song is similarly poppified. I take it, given the stated concern for the economies of these countries, that this is ironic; if so, it's somewhat heavy-handed, just grafting Western schlock culture onto that of Haiti. I can't help feeling that's a kind of easy out. Afghanistan receives some death metal vocals before settling down, into interestingly mismatched voice (Bjorkish) and piano lines; the two approaches shuffled back and forth--maybe the most complex and enjoyable track here. After a trivial, warbling rendition of Vanuatu's "Yumi, Yumi, Yumi", the disc closes with what's essentially a lovely anthem (Guyana), sung and played almost straight, though with an oddly jazzy inflection. Some ok work here but overall, too cutesy by half. 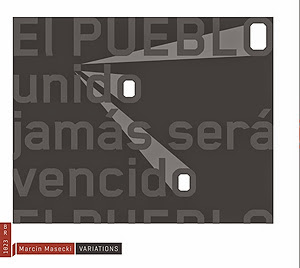 Talk about biting off a large chunk. Masecki returns with a composition loosely based on Rzewski's own variations on "El Pueblo Unido Jamás Será Vencido", a quixotic endeavor if ever there was one. More, according to the brief notes on the Bôłt site, he considers the work a "failure". Nonetheless, we have this recording, with Pior Nowicki at the pianos (grand and upright; he also vocalizes). Now, I've always loved the Rzewski piece, have multiple recordings of it and have seen it performed several times. This was going to be a hard sell not to mention my general bafflement as to why one would try. I'm guessing it wasn't because Masecki was dissatisfied with Rzewski's reimagining of the Chilean song--his version certainly shares a basic approach. He's less deeply Romantic than Rzewski but also, crucially, less steely-minded (which provides an essential offset in the earlier work), with a drier sensibility. Still, the variations he works are largely tuneful and attractive, treading similar old-fashioned/avant ground as did Rzewski. Nowicki seems to possess the requisite jazz/blues touch, in addition to classical chops, to enliven the work. I'm not sure "failure" is appropriate but one major distinction is the relative lack of organic flow that works so beautifully in the Rzewski, and I get the sense that such a flow was sought here; there's little that's overtly disjunctive, just a slight overall stiffness. It might be a zeitgeist thing as well, that it's sadly too difficult to summon forth the requisite, raging passion that was more easily kindled in 1975, though Masecki attempts a rousing finale here.

Given the unfairness of the comparison, however forced into it one is, these "Variations" are enjoyable enough to make me (despite the "Hymnen" release") interested to hear more from Masecki.