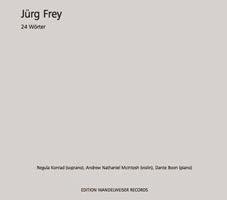 As much as I tend to seriously enjoy the majority of music from those composers associated with the Wandelweiser collective, I often get the feeling that it's Frey's music that resonates the deepest, that his sense of pure musicality has the most affinities with my own. Such an observation is only of real value to myself, of course, but there's such a sense of rightness I get from his work, including his pieces involving field recording (for example, the "weites land, tiefe zeit" set on b-boim); his music, to me, always sounds fantastic. That affinity is enormously well represented on this tremendous release.

Despite the title, there are 27 pieces here, ranging between 0:33 and 4:21, 25 of them with words, performed by Regula Konrad (soprano), Andrew Nathaniel McIntosh (violin) and Dante Boon (piano). The other two pieces are instrumental (piano/violin and solo piano). Some of the words encapsulate emotional states--Heiterkeit (Cheerfulness), Zartheit (Tenderness)--others connote dreamier, more Romantic notions: Einsamkeitsmangel (Lack of Loneliness), Zittergras (Quivering Grass), Ortlosigkeit (Without Place). Only two are repeated, Tod (Death) and Glück (Happiness); one nods in appreciation. The structure of the cycle is explained a bit in the revealing conversation between Frey and Thomas Adank printed on the inner sleeve. The words are, roughly, arranged from long to short to very long, imparting a suspension-bridge kind of aspect to the composition (with intervening mini-crests) and each word is repeated twice in a given "song", usually sung, sometimes spoken. The music, of course, is quiet, spare but with a very strong underlying current of lyricism. On a "typical" piece (there aren't any--there are infinitely subtle variations in each), the piano plays consonant, measured single notes or chords, suspended (you can often hear that lovely, muffled sounds of the sustain pedal being released) while the violin provides a perfect contrast with a grainier, breathier line that edges into microtones. The voice, crucially, remains at a kind of semi-remove, not at all declamatory or sardonic but also never getting within a mile of the sentimental. Instead, Konrad's words are clear, thoughtful and imbued with a perhaps melancholic sense of understanding. As mentioned above, each word is sung twice, almost always with a difference in rendition involving pitch or, in the longer words, number of pitches per syllable. More, Frey places these two enunciations within the piece with exquisite care and variation. And I should say in passing that the two instrumental songs are just gorgeous.

My knowledge of the German song cycle tradition is pretty cursory at best but, especially as Frey cites Schubert and Schumann in the enclosed conversation, it's next to impossible not to think of "24 Wörter" at least partially in that context and, for me, it both fits right in and extends the tradition along a particularly beautiful path. An early favorite of 2015--by all means, give a listen.