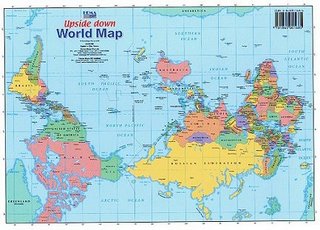 Kenny Weir (an Aussie, naturally) posted this at JazzCorner recently. I've seen similar images in the past but not for a while. Interesting how disorienting it is, no? You see things one way your whole life and they acquire a "rightness" on which you (or, at least, I) hang certain attributes that have nothing whatsoever to do with the reality of the situation. Like the way Africa "hangs" pendulously, like a hunk of melting camembert. Or Australia, like a sack of grain propped on a log. You assign gravitational qualities to land masses as though "down" means anything in this context. Look at the US. I mean, it's entirely natural to, in the West at least, have a nice, delineated border, a firm pinion from which the rest of the country hangs, its irregular tatters along the southern border entirely explicable. Here's another image that abstracts things helpfully: 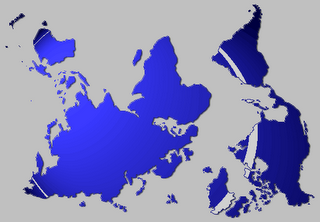 Though this strikes me as less troubling, even without national borders (not sure what that arc thing is) it seems a bit alop. Africa looks perilously poised there, about to tumble into the Atlantic not to mention South America all but snapping off; no way that little isthmus can bear so much weight!


I guess the less deeply familiar you are with a geographical area, the less you're bothered by it. For example, to me Japan looks positively natural! 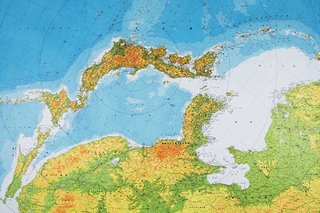 Hmm, Japan is precisely the only one I find weird.

Well, you Belgians are a strange bunch....

Posted at JC by moi, if I recall correctly, as a counter to continually being asked by cyber jazzers (particularly 'Mericans) about how things are "down there". It's all absurd. But brian, you're right - it's truly amazing how much, er, gravity such a top/bottom, north/south mindset can have.