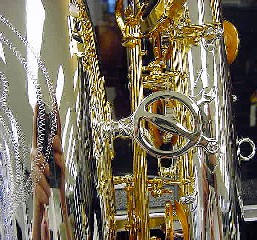 Last night, I posted a review at Bags of Henry Kuntz' solo album, "Wayang Saxophony Shadow Saxophone" which elicited a response from my buddy Dan Warburton that raised two issues of some interest.

One, more generally, has to do with audio CDs that stem from multimedia origins. In my experience, this is more commonly encountered in discs containing the sound portion of site installations (for instance, several of the Melbourne-based artists like Philip Samartzis or Michael Graeves). Sitting at home, dropping the disc into an audio player, the listener is necessarily cut out from much of the situation for which the sounds were designed. Listened to one way, you're often conscious of this lack, thinking, "If only I was able to hear this in its proper context, it would undoubtably have been more successful." I tend to say, "Well, use your imagination!" It ain't all that hard, especially if you've been given a degree of description of the intended environment in the liner notes or other explanatory text, to hear the music/sounds with at least some approximation of their proper context. Kuntz' music was meant to be heard accompanying some form of Balinese puppetry. You might say, "Well, he should have released a DVD". Yes, that would have been ideal but I'll assume for the moment that, given his likely financial situation, that wasn't an option. So, as listener, you have to do a bit more work. Heard "only" as music, the saxophonics (largely breath tones) didn't particularly captivate me. But I found that when I ran a mental movie of shadow puppetry (I've seen enough of it to be able to recreate the imagery without much problem), while listening, it worked 100% better. For me, it still wouldn't fall into what I'd consider "great" music, but it serves its purpose admirably and that's enough for me (arguably, as is usually the case with film soundtracks, it shouldn't be attention-gettingly good). I can understand someone not wanting to deal with only a piece of the package. Fair enough, but if that's in fact what you're presented with, I don't think it's too much to ask for a bit of compensatory work on the part of the listener.

Dan also voiced the commonly held (and not entirely unreasonable) opinion that there's nothing left to do vis a vis solo saxophone recordings. This has been bruited about for a number of years now and, de facto, there are an awful lot of boring solo sax discs floating around. Why the aversion to sax as opposed to other instruments? Well, imho, it has to do with the audible baggage that's part and parcel of saxophonics but which can be masked in other instruments. Brass, for example, seems to be more easily abstracted. You can listen to Greg Kelley playing by himself without necessarily picking up allusions to Miles or Bowie whilst saxophonists have a very hard time avoiding jazz connotations. It can be done, certainly, and is (Stephane Rives, for instance) but it's apparently far more difficult. There's also the "human cry" quality inherent in reeds, something generally eschewed within eai (good or bad? Neither, imho, but more to do with what's necessary in a given period; it was good to dispense with for a while--maybe it'll come back refreshed, viz. Kai Fagaschinski's gorgeous clarinet) that's difficult to cast off. In any case, there's the general idea that a given instrument is exhausted and that's something I have a problem with. That view narrows things down too far toward the instrument and away from the musician. It's tantamount to saying, "Everything's been done with the color red. You can't use it anymore in painting." There may, in reality, be a dearth of interesting solo saxophone recordings but I'd only view that for what it is, a lack at this time, and be wary of making a generalized prediction. Musicians have this habit of coming along and destroying one's preconceptions, happily. The next ten solo saxophone records that cross my CD player may indeed be dross but I'll still give the 11th a listen.

Inger Zach - In (also fine-sounding on first blush, a solo outing on kning)