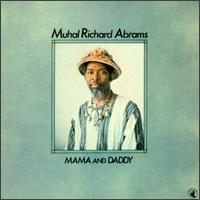 Well, with a turntable back in the house, I can return to occasionally carrying on with the little project I began some months back, Browsing Through My Record Collection. When last we met, I'd gotten to Muhal's "Mama and Daddy" but wasn't sure my recollections were up to snuff. So I played it today and, I'm afraid they were. "Afraid" in the sense that, with this album (Black Saint 0041, recorded June, 1980) Abrams settled into a kind of rut that would persist at least until I grew weary of checking out his every release. This rut consisted of, generally with one exception, constructing an album made up of exceedingly dry, quasi-academic works, albeit with a definitely jazz-based ensemble. That one exception, inevitably the saving grace of the session, was a heavy, often beautful, blues-based piece. The frustration factor was large. I mean., look at this line-up: Abrams, George Lewis, Wallace McMillan, Vincent Chauncey, Bob Stewart, Leroy Jenkins, Brian Smith, Andrew Cyrille, Thurmna Barker. All-Stars at every position. Yet he forces them through three pieces that are just tired excercises in melding avant playing with the sort of "classical" approach that was popular in Third Stream circles in the late 50s and early 60s and arrives as arid and brittle as week-old Wonder Bread here. When we finally reach the title cut, it's with a mix of joy and anger, the latter to the effect of, "Why aren't you filling the album with stuff this beautiful?!" *sigh* Gorgeously languid, strolling juicily along and capped by a superb Abrams solo. Almost worth it for this piece alone. Back in the late 80s, I made a cassette of the single pieces from this and subsequent Muhal albums that were worthwhile. Damn good. It's always struck me as bizarre that Abrams seems to have felt it necessary to prove himself in such a tedious area, as though the world needed more sterile, academic pseudo-avant classical music.

Oh yeah, the cover. I can't say I was ever all that big on the dressing in African costumes, the face-painting and all, but some people can pull it off better than others. And it helps when it's in some kind of context, even if it's just a performing stage. A photo that looks like it was taken in some mall-based picture studio just looks silly, reading as though someone had just rifled through the props basket. The one on the back cover, fortunately unavailable, is even worse.
Posted by Brian Olewnick at 11/18/2006 03:44:00 PM