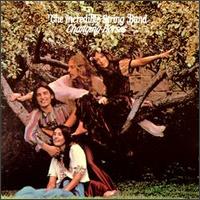 I'm consistently amazed at the ability of the brain (well, my brain, but I assume the characteristic applies widely) to remember music and lyrics it hasn't encountered in decades. I mean, I forget all sorts of things routinely, but all someone has to do is mention a given pop song from 1967 and, bam, there it is, at my mental beck and call at an astonishing level of detail. A year or two ago, there was some discussion of the Incredible String Band on JazzCorner. Their "Changing Horses" album was a big favorite of mine in high school and I have fond memories of seeing them at Vassar around 1971. However, this record, along with the vast majority of my rock holdings, was sacrificed in the Great Rock Purge of 1975 when I traded 'em all in, purifying my collection to almost all jazz components. Even in retrospect, I bet about 80% of them are better off gone though, in the intervening years I did have to replenish things like Beefheart, Hendrix and such. I remember a couple of times looking over "Changing Horses" in the disc bins, wondering how I'd hear it today.

In any case, when the subject was brought up on JC, I immediately flashed on the opening track, "Big Ted", a song I'd not heard once, I feel safe in saying, for over 30 years. But there it was, complete and whole, music and--at least for the most part--lyrics. Where was this lodging all those decades, so uncorrupted? This morning, while walking Nanook, "Big Ted" surfaced unbidden once again. I was whistling the tune, singing the song in my head. Let me see how close I've gotten the lyrics; this is without checking:

Well Big Ted's dead, he was a great old pig
He'd eat most anything never wore a wig
Now he's gone like snow on the water
Don't cry

He was getting old, so the farmer said
Sold him to the butcher just to make a little bread
Now he's gone like snow on the water
Bye-bye

Big Ted's dead , he was a great old pig
He'd eat most anything, never wore a wig
Now he's gone like snow on the water, good bye

He was getting old so the farmer said
"Sold him to the butcher just to make a little bread"
Now he's gone like snow on the water, don't cry

Not too shabby. I still like "on" better than "sold" in that last line, though.

However, they also include these other stanzas which only ring a vague bell with me:

He came into the kitchen while we were away
He took all the rice and he forgot to pay
He´s gone like snow on the water, good bye

He never cared to do the boogaloo dance
All he ever thought about was food and romance
And he's gone like snow on the water, good bye

Interesting that this set of lyrics would vanish while the others are almost perfectly intact.

This strong, yet simple man
Riding on the edge of danger
Secure in prayers
That God has heard him say
(Chorus)
He can move a mountain
Leap across a winding river
Once he's made his mind up
There's nothing he won't try
There's something deep inside him
Lusting for the thrills that drive him
Yet he knows some day
He's going to have to face
That canyon in the sky

I have no clue what that is. As you're a relatively young tyke, can I assume that's from something, oh, in the early 80s? Lemme check......

The Ballad of Evel Knievel? Sheesh.

I'll be your long haired lover from Liverpool and
I'll do anything you ask.
I'll be your clown or your puppet Or your April Fool
Cut my hair or even wear a mask.

I'll be your Valentine
And you'll be mine
And things'll be cool.
We'll move along together every day.
I'll be your long haired lover from Liverpool
You'll be my sunshine daisy from L.A..

Hey, why don't you ever invite me to Record Club?