Three more reviews initially headed for Bags (I see this morning that server-affiliated site I Hate Music also seems to be down). These all arrived via the kind consideration of Nicolas Malevitis of absurd records. Thanks, Nicolas!

And then something comes along like “The Reversed Supermarket Trolley Flies Towards the Rainbow”. Swathed in a delightful pop-up kind of sleeve complete with a shopping cart-traversed rainbow—which I unfortunately am unable to reproduce above but which can be viewed here--this disc is nothing less (or nothing more) than a live recording from a 2 year-old’s birthday party. The affair for little Amaryllis was held in a century-and-a-half old house in the small northern Greek village of Iasmos in November of 2005 with music provided by Didac P. Lagarriga, a Barcelonan native. His array of instruments—laptop, balaphon, mbira, berimbau, piano, cello, guitar, bass, melodica and more—weave amongst the sounds of the party. There’s no screaming of tiny children (happily) though their voices filter through from time to time. More often, the hubbub is at a slight remove, perhaps from the next bower, occasionally drifting over to investigate what the strange Spanish musician is up to and contributing the odd growl, chortle or recitation of ABCs. Tunes come and go, generally with the sort of rhythmic character you get when playing kalimbas and balaphons. In between, the music floats off almost without purpose, accommodating the distant crying of a child here, providing obbligato for a spirited, perhaps tipsy mommy there.

It’s an entirely whimsical undertaking which, while it doesn’t present itself as anything more than it is, manages to create a fanciful, Fellini-esque aura. Part field recording, part performance, this trolley contains something quite wonderful and comes as a breath of innocent, brisk air into a scene that can get a wee bit hermetic.

Lalia has no website but ErstDist should also have copies. Otherwise, anyone interested may
inquire directly at laliarecords@yahoo.com

Leif Elggren
45 Minutes from underneath the beds 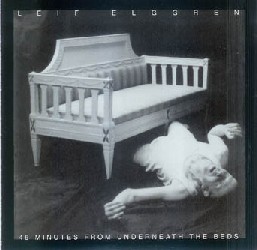 I guess the first thing I noticed when I slid this disc into the player was that it was 70 minutes long. A mumbling voice appears, speaking in English but sounding rather like a recovering stroke victim, going on about inflow and outflow from kitchens and bathrooms, sounding as though read from an instruction manual. I was previously unfamiliar with Elggren and, charitably, thought that perhaps this is the manner in which he speaks. Later tracks on this disc show this not to be the case, casting this initial sequence in a rather creepy light. It’s clearly a very personal statement, gone into in some depth in the accompanying liner notes involving the worlds he constructed lying beneath various beds, drawing scenes on the supporting frames there, etc. In that sense the main work here, which does indeed last 45 minutes, is likely successful as an evocation of this history. Whether or not the unconnected listener will find it of interest is another matter. I went back and forth, feeling uncomfortable and put off at some points, drawn in at others. The music proceeds in segued episodes, many of them having an electro-percussive aspect. There’s an extended loud, feedback-y drone near the start that does little for me but the chaotic section following, made up of what sounds like overlaid percussion recordings, is quite winning. Overall, I enjoyed more than I was bored by.

Of the remaining six tracks, two are in the 10 minute range, the others very brief. The first of the former is my favorite cut on the disc, a rich welter of low throbs and clatter, the least hermetic work here, one that at least hints at an outside world; the second will delight No Fun folk (I liked it too). A couple of the shorter ones are talk pieces, delivered without the stroke effect but still not terribly illuminating. 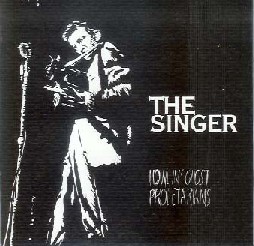 Conceived as an homage to Johnny Cash, the interior sleeve of “The Singer” contains a passage (in French) from Cormac McCarthy’s “Outer Dark” and the general tone of the disc is, indeed, somewhere on the nether side of Cash at his most anguished even if it never quite achieves McCarthy-ian depths of bleakness. The music of Loren Connors might be the most appropriate point of comparison.

Fabrice Eglin (guitars, slide guitar, amp) and Michel Henritzi (guitars, slide guitar, amp, harmonica) fashion nine blues-drenched songs, chain-draggingly slow and rough, seemingly designed as evocations of the blood soaked, unrelentingly harsh Western vistas encountered in McCarthy’s novels. Guitar lines regularly morph into feedback howls while laboriously pushing their way through clouds of dust and mounds of carrion. While the pieces are generally effective, they’re also similarly so with not so much to differentiate over the course of the disc, though the quieter works (such as the two “Outer Dark” songs) do camp out in an even sparser, dustier terrain. This kind of “monotony” may well be intentional, serving as a metaphor for a day after day trek over brutal land and, if approached with that idea in mind, the album works quite successfully. If listened to in hope of more elaborate variations, one might be disappointed, but as a whole, ‘The Singer” functions well as a grim, forlorn, not unsentimental slab of hurt.

I reckon we should all just start posting here and for get Bags and IHM ;)

I'll repost all these on Bags assuming it reappears some day (I trust it will) but in the meantime, I hate having them pile up....

Bush goes ballistic about other countries being evil and dangerous, because they have weapons of mass destruction. But, he insists on building up even a more deadly supply of nuclear arms right here in the US. What do you think? Why has bush turned our country from a country of hope and prosperity to a country of belligerence and fear.
What happened to us, people? When did we become such lemmings?
The more people that the government puts in jails, the safer we are told to think we are. The real terrorists are wherever they are, but they aren't living in a country with bars on the windows. We are.